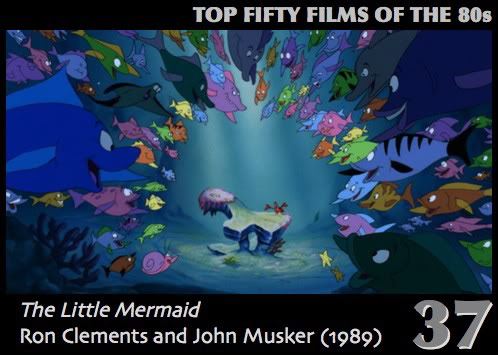 #37 — The Little Mermaid (Ron Clements and John Musker, 1989)
By most accounts, Disney animation was like a boxer knocked out on his feet, reeling in the ring, obviously done but somehow not quite at the point where it was ready to fall for good. By most counts, the span since the last outing that could honestly be termed a classic was measured in decades. Recent outings such as Oliver & Company and The Great Mouse Detective were respectable but too easily filed with the middling animated efforts of other studios like the cutesy dinosaur fable The Land Before Time. The misbegotten 1985 film The Black Cauldron was the title that defined the state of the studio for many. The once mighty creative force had lost its mojo, and it seemed irretrievable. That theory was summarily demolished by the release of The Little Mermaid.

The film embraced the long-discarded Disney methodology of fairy tales and princesses–both basically absent from their finished products since 1959’s Sleeping Beauty–which may have partially accounted for its success, both creatively and commercially. There’s something to be said for a back to basics approach, and the film is buoyant with the comfortable exactitude of the tried and true. The story of the lovelorn girl, the prince she longs for and the villainous foe who impedes their path to happiness is familiar in the best of ways. While never especially surprising, it’s always pleasing to watch it unfold, especially to note the ways that the animators, guided by directors Ron Clements and John Musker, fill the frame with personality. A sonnet isn’t about the surprising ways in which the lines are delivered; it’s in the ingenuity of the words used in the service of the form. The Little Mermaid is all about the panache, wit and charm in the telling, and each of those qualities exists in abundance.

There’s one other key aspect of the film that makes The Little Mermaid not just a return to form for Disney animation, but arguably a film that surpassed all the grand animated adventures that preceded it. The songs by theater veterans Alan Menken and Howard Ashman go beyond the lovely, plainspoken standards crafted for earlier films. Befitting their shared background, the songs are fully integrated pieces of storytelling revealing character, motivation and driving the plot along. What’s more, the ingenuity of the compositions, both in Menken’s luminous melodies and Ashman’s crafty lyrics, invest scenes with incredible emotion. “Part of Your World” bristles with girlish curiosity, and “Kiss the Girl” enriches its scene of budding romance with the ache of uncertain anticipation. Even a song that’s ostensibly filler, specifically the charging ingenuity of “Les Poissons,” goes beyond its seeming simplicity by virtue of its sheer ingenuity. And when Menken and Ashman unleash their true showstopper with “Under the Sea,” it’s no less than one of the very best songs to ever grace a Disney film. That may be true simply on the basis of the couplet, “What do they got? A lot of sand/We got a hot crustacean band.”

The Little Mermaid is vivid colorful and wildly engaging. In its very cels is the stuff of imagination itself, where possibilities are endless and magic intertwines with happy endings into the most wondrous ways. Truthfully, no matter its importance in the evolution and revivification of Disney animation, The Little Mermaid holds a special place entirely on the basis of its own considerable merits.