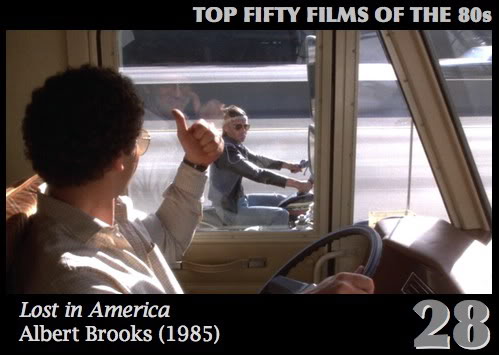 #28 — Lost in America (Albert Brooks, 1985)
Albert Brooks is very funny, but that compliment, high as it is, can be paid to many people. The thing that truly sets the finest work of Brooks apart is its fearless brilliance, the astounding ability he has to build his humor from the inside out. It displays the expected soundness of construction that could reasonably be expected from a man who seems to study comedy with the rigor of a highly schooled abstract thinker. It’s situational and grounded in character, even establish personae, but Brooks comes at his material from a sidelong angle. He doesn’t only try to find the unexpected wrinkle; he deconstructs a joke to see how it works and then figures out some novel way to put it back together that makes it even more effective. And he does all this with something resembling full-on detachment from audience approval, even as he casts himself as characters who are defined in part by their neuroses and even neediness. More than any other comic creator of his stature, Brooks builds his work to meet standards that he sets with little concern for the perceived needs and desires of others. An Albert Brooks movie isn’t really like anything else. Good or bad, it’s clearly, adamantly his alone.

Lost in America stars Albert Brooks and Julie Hagerty as an upscale Los Angeles couple who become disgruntled with their privileged places in the rat race. They decided to chuck everything and tour America, holding up the boundlessly free bikers from the movie Easy Rider as their inspirational ideal. Naturally, much of the humor derives from the fact that the couple has taken an approach that couldn’t be further from the cinematic hippie bikers, shuttling down the highway in a massive RV. They haven’t abandoned the comfort of their old life; they’ve merely condensed it into a moving vehicle. There’s a near obsessiveness about their bountiful savings–their “nest egg”–that they bring with to guarantee continual comfort. It’s the breaking of that egg that trigger’s the film’s humorous agony.

In the screenplay Brooks cowrote with his frequent collaborator Monica Johnson, the comedy often derives from the exquisite, mortifying discomfort the characters endure. There’s a lengthy scene in which Brooks’s character sits down with the manager of a casino to try and convince the man of the value of returning the money that his wife lost in an all-night gambling binge. The casino manager is played by Garry Marshall, then known primarily as the creator of TV sitcoms that were efficient factories of set-ups and punchlines, precisely the opposite brand of the Brooks brand of comedy. A neophyte actor, Marshall made for the perfect foil, laconic in the face of Brooks’s jittery anxiety, and the scene gets its laughs almost exclusively from the dynamics of their interplay. There are almost no jokes in the scene, and yet it’s one of the funniest and most memorable in the film. Brooks extracts the humor by pushing the unease further and further. It’s the precursor, by a couple of decades, to the comedy of emotional devastation that informed television’s The Office.

Both Brooks and Hagerty are outstanding in the film. In fact, Hagerty is so good that watching this creates an intellectual disconnect between her evident talent as a comic actress and the relatively uninspiring trajectory of her career. Both actors fully embrace the pathos of the moment, the perpetual dissatisfaction the characters feel, as a means to heighten the comic bleakness of their shared situation. It’s played less as a comedy and more as a tragic domestic drama that happens to be really, really funny. There’s a splendid sting to their work that carries over fully to the film. Lost in America succeeds because it establishes in a quietly brilliant fashion that most people who dream of indulging their wanderlust across the vastness of the nation will find that the pavement in a lot harder than they think.