I used to be a sucker for limited series. While this addiction could bring about personal bankruptcy in today’s comic book market that builds every major publishing event around nearly countless numbers of titles with predetermined numbers of issues (not to mention to apparent need to make sure around eight or ten series featuring Wolverine are always running concurrently), they were still a rarity in the early eighties. I think the appeal of absolutely knowing that I’d be able to get every issue appealed to the completist urge that came with being a comic book collector, but Marvel Comics also had a knack early on for featuring characters for whom I held special affection.

As a fairly regular reader of The Avengers, I was definitely familiar with Hawkeye, the purple-clad archer who was one of the only members of the assembled mightiest heroes of Earth who couldn’t really claim superpowers. Like the corresponding figure who wielded a bow over at the distinguished competition, Hawkeye was just an expert marksman who had a few trick arrows in his quiver, although by now the dimwits over at Marvel who never met a simple idea they couldn’t needlessly complicate have probably attributed his accuracy to a latent mutant power or some forgotten encounter with a Gamma-irradiated bullseye target. It was his normalcy that appealed to me, especially since the common characterization was built around a compensatory smart alec sense of humor that my runty, bullied self could relate to all too well. Even included in the team of Marvel’s biggest heroes, Hawkeye seemed unavoidable like an outsider.

Appropriately then, the limited series that put Hawkeye firmly in the spotlight bypasses any major supervillains to pit his against a series of goofy outcasts. Written and penciled by Mark Gruenwald, the series begins with Hawkeye working security for Cross Technological Enterprises in New York. When he’s called in on an emergency, he encounters the acrobatic crime-fighter who was Marvel’s newest sensation a couple of years earlier: Mockingbird.

There you see Hawkeye learning a valuable mathematics lesson, specifically that two is greater than one. He actually gets clobbered quite a bit in this limited series. It’s part of the natural downside of being a regular joe superhero.

Turns out that Mockingbird is on the right side of this conflict. Cross Technological Enterprises is a front for nefarious doings, which Hawkeye quickly discovers. He and Mockingbird, who’s become his new partner by default, are dropped into a tank filling up with toxic sludge Hawkeye’s former employees. They seem pretty cheerful about it, so he may have had some issues as a manager. After getting doused pretty thoroughly, they manage to escape, only to find themselves pursued in fairly short order by costumed goons, including a perversely quiet sharpshooter called The Silencer. Fighting off bad guys leaves Hawkeye’s supply of arrows depleted, which necessitates a side trip: 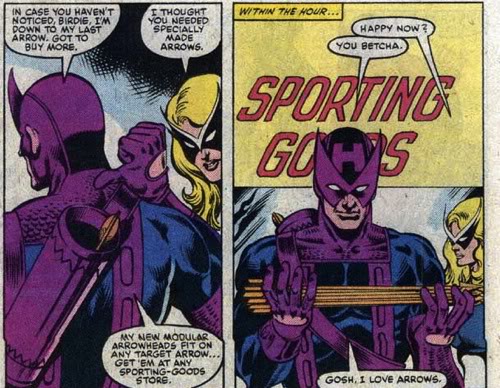 “Gosh, I love arrows.” Okay, so it’s a little weird just how turned one Hawkeye seems to be by his next handful of shafts, but no weirder than the next pair of costumed do-badders dispatched against our heroes. Oddball and Bombshell are the dastardly duo who come hunting Hawkeye and Mockingbird. And the fancy bocce balls the former tosses around give Hawkeye some difficulty.

Mockingbird’s metal sticks sure do seem handier than Hawkeye’s arrows. Not handy enough, perhaps, as Oddball and Bombshell wind up besting the Avenger and his new best pal, delivering them to the evil mastermind behind the whole plot.

I really like “Master Subversive, Brainwasher, and Entreprenuer” as introductory titles. I’m thinking about modifying my next set of business cards appropriately. I also wonder if other villains that Oddball works with get tired of him constantly juggling whenever he has a split second of downtime. Crossfire’s self-awareness over the long-winded exposition he’s about the deliver is another nice touch. If you’re going to blunder into the common villain mistake of needlessly sharing the details of your scheme, you may as well call attention to it. Everyone’s thinking it anyway.

It probably goes without saying that Hawkeye and Mockingbird extricate themselves from this whole mess and wind up saving the day. This is an eighties comic book and not a seventies movie, after all. There was one more surprise that Gruenwald saved for the very end, though.

So these two characters who hadn’t even met before this adventure, an series of skirmishes that probably took no more than a couple of days, went ahead and impulsively marry. What’s more, Hawkeye was dumped in the first issue by his girlfriend, who was only spending time with him as part of the major evil plot, so he was rebounding pretty hard. Surely, though, it would be all good news from this point on.

42 thoughts on “My Misspent Youth: Hawkeye by Mark Gruenwald”