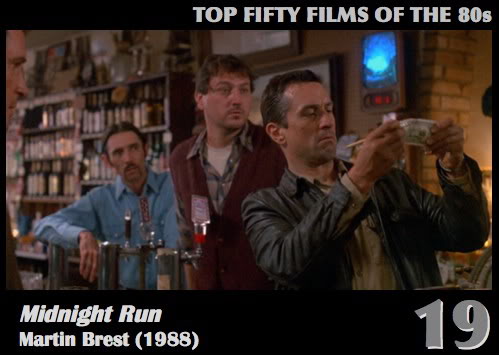 #19 — Midnight Run (Martin Brest, 1988)
Action-comedies featuring a pair of charmingly mismatched partners weren’t invented in the nineteen-eighties, but Hollywood studios sure spent the better part of that span of years cranking them out as if they were trying to perfect them on the mandated directive of the former movie actor who presided over the White House. If there had been some strange equivalent boast to John F. Kennedy’s timetabled pledge to send a man across the vastness of space to set foot on the lunar surface, then the summer of 1988 was when the genre had its moon landing. Midnight Run is inarguably cut from familiar cloth, contriving to obligate a pair of antagonistic characters to one another from an extended journey across the byways of the country. The arc of their relationship isn’t especially surprising of novel as they move from adversaries to mutual admiration and something that can reasonably be termed friendship, but sometimes it’s not the destination or the journey that matters. It’s how entertaining and slyly insightful the whole damn thing is.

Directed by Martin Brest with an enlivening economy, the film stars Robert De Niro as bounty hunter Jack Walsh. A former Chicago cop who’s never quite recovered from leaving the force under ignominious circumstances, Jack is eking out a meager living chasing down bail-jumping miscreants, aspiring to open a coffee shop with his savings someday. He’s seemingly found his pathway to the funds he needs by taking on a job to bring in Jonathan “The Duke” Mardukas, a former mob accountant who’s of great interest to both federal authorities and the gang boss from whom he embezzled millions of dollars. As Jack and The Duke edge their way back towards Los Angeles, the many competing forces that want a piece of the fugitive converge on them in ways that are clever, plausible and consistently funny. This was George Gallo’s second produced screenplay and it’s a marvel of deft storytelling and a testament to the unrivaled value of grounding humor firmly in the heavy soil of well-drawn characters. There’s not a false moment in the many varied interactions in the film.

As truly great as Brest’s precisely measured directing job is, he perhaps deserving the most profound praise for his casting instincts. Besides De Niro–who forecasts the looser, friendlier roles that would dominate his career starting about a decade later while also demonstrating the ways in which the supposedly more frivolous material could be bolstered by the same commitment and attention to detail that won him two Oscars–the cast includes Joe Pantoliano, Yaphet Kotto and the great Dennis Farina delivering performances that rank among their very best work. But there’s one acting job that dominates the film and instills an addictive pull to the entire outing. Charles Grodin, master of unassuming hostility, may be as unlikely an actor to play a figure dubbed “The Duke” as could be found in the annals of cinema. Grodin takes the discomfort that’s his specialty and pairs it with the whirring mind of an escape artist fixated on the handcuffs that bind him, sure that if he probes deeply enough and long enough he’ll find the weak spot in the steel. He mercilessly needles at De Niro’s brash tough guy, correctly surmising that he’s the way out of this fix. It’s a variation on the act Grodin had brought to talk shows for years, but leveraged into the service of a character wise enough to hide his mounting desperation. It requires a perfect balance, and Grodin doesn’t even quiver as he crosses the wire.

Midnight Run is one of those movies that I find nearly impossible to turn off. I’ve sacrificed so many nights of potential productivity upon discovering its bracingly profane comic exchanges spilling out from some cable channel–premium cable only, please, as a sanitized version of this dialogue is unthinkable. There are certain scenes that I have nearly memorized, but my delight in them hasn’t abated one bit across countless viewings. Studios didn’t give up on following the patterns of Midnight Run after it came out, but they may as well have. It’s hard to fathom how they’d ever do it better.

One thought on “Top Fifty Films of the 80s — Number Nineteen”