As the list below the “Previously…” down there attests, I was decisively a fan of one particularly publishing company when I started reading superhero comics. I was a friend of ol’ Marvel and a member, albeit unofficially, of the Merry Marvel Marching Society. That was the universe of physics-defying derring-do that I first connected with, and, like most fans, I stuck with them while largely offering nothing but disdain for the distinguished competition. My militancy in that respect started to erode over the years before finally giving way entirely when DC Comics embarked on an aggressive reboot of their entire line of characters, a strategy they clearly still like. In the mid-nineteen-eighties, their smash limited series Crisis on Infinite Earths was the beginning of the continuity-rewriting ways, but the thing that drew me in was writer-artist John Byrne’s relaunch of Superman. Previously a Marvel mainstay, Byrne’s jump to DC Comics was a major occurrence. I dutifully picked up every title he worked on, including the mini-series Legends, which proved to be a helpful introduction to the company’s characters. Indeed, it had the intended effect, and I wound up collecting a few of the new titles that spun off from it. One of those was the relaunched version of a venerable DC super-team.

The Justice League of America made their debut in 1960 and quickly graduated to their own title. They persisted over the years with enough different derivations to inspire endless debate about the superiority one line-up over another. By the mid-eighties, the group was at a clear low point, populated by afterthought superheroes, an unfortunate breakdancer among them. It was clearly a series that was due for a change, and it wound up going through an especially significant one.

Justice League #1 was introduced a creative team led by Keith Giffen, who provided the plots and the rough pencil breakdowns that were sort of like storyboards. J.M. DeMatteis scripted the series and Kevin Maguire turned the artistic framework into expressive images. In many ways, it was structured like a completely conventional superhero series, but there was a decisively self-aware sense of the absurdity of comic book tropes from the very beginning. 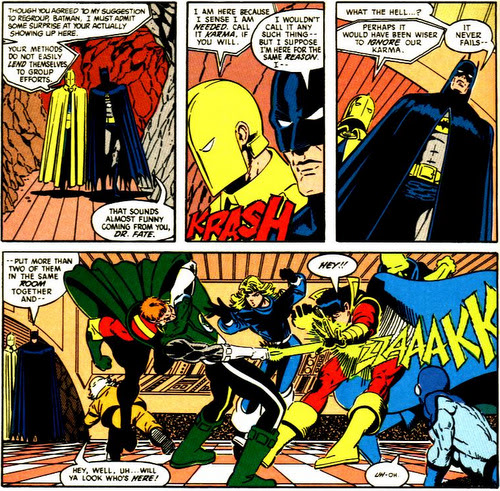 The creators were telling stories that fit firmly in the DC Comics universe, but they were willing to tweak expectations in a way that was completely novel to me. Marvel’s success was built on making comics that were both more fun and more angst-ridden than those of their competitor, but by this point in time, the latter quality had largely won out, probably due to the success of Frank Miller’s grim, urban Daredevil and Chris Claremont’s roiling soap operas in X-Men and other books featuring sorrowful mutants. It was as if the company reacted to the pure loopiness that defined their line in the seventies by denying any vestiges of those giddy excesses. The new comics were going to be noble and worthy, dammit.

That seriousness was what I was looking for too, pleased in the way it seemingly validated superhero comic books as a valid art form in my eyes. But my preference for that material also made the rollicking playfulness of Justice League especially intriguing. Not only was a whole new world of super-powered characters unfolding before me, it was doing so with a grand cheekiness and a fervent desire to always find a way to make a joke. If, for example, I was introduced to the Royal Flush Gang in a manner that tried to make them fearsome and imposing, I probably would have disregarded them as hopelessly silly. Allowing their inherent silliness to go gloved-hand-in-gloved-hand with the threat they imposed made it all more palatable to me, and also highly entertaining. 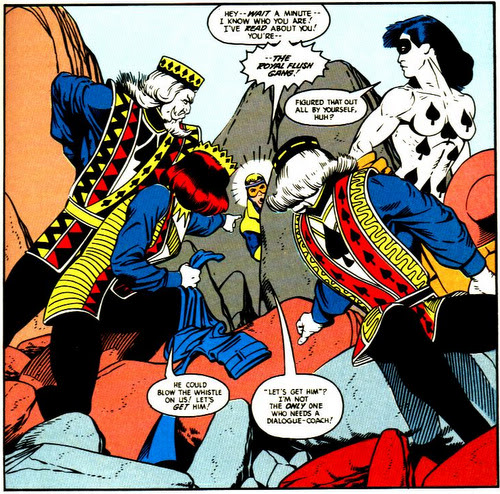 The predilection for out-and-out gag writing got more pronounced as the series rolled on. What started as sly acknowledgements of the comic possibilities of the characters quickly evolved into over jokes that wouldn’t be all that out of place in the broadest of sitcoms, albeit some unique sitcom featuring a gold-plated superhero from the future who has a unique response to the question, “You wouldn’t hit a woman, would you?”

In writing the series, Giffen and DeMatteis felt emboldened to use the entirety of the DC pantheon as their playset, paying particular attention to oddball characters that wouldn’t otherwise find an easy fit in the more straightforward titles that resided on the “New Releases” rack. The bizarre Steve Ditko creation the Creeper wasn’t a likely guest star for earlier derivations of the League’s adventures, but he fit in grandly here, even allowing for some acknowledgement of his shared history with Batman. 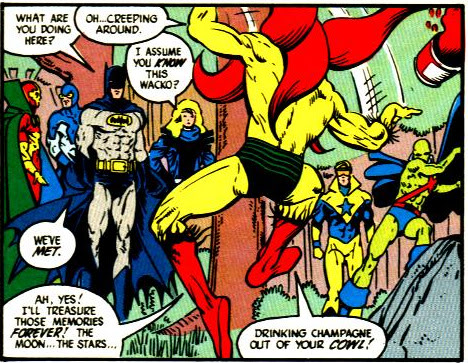 His recollections of that shared history may not represent the canonical path of continuity.

Batman’s presence in the line-up is especially interesting. Most of the other characters that were part of the team were largely without a set place in the DC Universe otherwise. They were storied characters with significant histories, but many of them were also somewhat unlikely candidates to carry their own title. That theoretically gave Giffen, DeMatteis and Maguire more latitude to have fun with them. Batman, on the other hand, was as iconic as they came, arguably an even more central figure to DC Comics than Superman. And yet there he was, surrounding by teammates who cracked wise and deployed to deck a cantankerous cohort in one of the most famous sequences in the whole run. The character’s shift from stolid superhero to relentlessly dour, haunted soul is usually attributed to a pair of seminal stories authored by Frank Miller at about this time, but, looking back at these Justice League issues, I wonder how much Batman’s depiction here influenced his future. Batman’s grim countenance was heightened as a means to develop humor from the contrasting goofiness of the other characters. He’s almost one-note in order to make it more humorous when he deviates from that fierce persona, and that sort of focused single-mindedness has dogged the character ever since. It’s an especially unlikely twist: one of the lightest, loosest series DC Comics ever published leading directly to the glum monotony of one of their flagship characters.

Successful as this run was, DC often seemed to try and downplay it over the years. There was even suspicion voiced a few years ago that the editorial leadership of DC Comics had such a grudge against that run that they couldn’t resist pummeling the signature characters from those issues with especially dire circumstances. Even if that was the case, they allowed the creators to return to tell similar stories with some regularity, right up to a recent exercise in nostalgia that is probably the final fade to black of what was affectionately known as the “Bwah Ha Ha” era of the Justice League. It was surely fun, and uniquely so, while it lasted.