As I’ve noted, I entered 2001 feeling somewhat detached from the college rock music that I once adored. Certainly part of that was just a natural part of growing older, but it also felt a little bit like a betrayal of my former self, the one who emphatically agreed with one of my collegiate cohorts who openly hoped that he wouldn’t be that middle-aged guy who was still calling the college station to request the music that he liked decades earlier. I had tacitly pledged to stay current, dammit! So it was a special kick in the gut to discover a so-called supergroup comprised entirely of members whose former bands carried almost no cachet for me. I’d heard of Quicksand, the band Walter Schreifels was in before forming Rival Schools, but I had no cultural continuity built into brain regarding the band. The same could be said for Gorilla Biscuits, CIV, Youth of Today and Iceburn, the other groups that the membership of Rival Schools was drawn from. I came to the album as fresh as could be. Luckily, my faculties hadn’t fully atrophied and I could still recognize that the music on the record was damn good, exactly the sort of thing I might have gravitated to a decade earlier, at least during the shifts when I arrived in the air-chair feeling particularly glum or angry. Rival Schools didn’t last very long. A sophomore album was reportedly in the works when the band called it quits, although an eventual reunion was, in the manner of the times, inevitable. 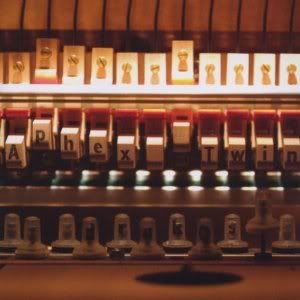 I’d definitely heard of and heard from Aphex Twin by the summer of 2001, but the music was so far outside of my range of interest that any attempts I made to connect with the acclaimed offerings of Richard D. James–the musician behind the Aphex Twin name–ending in pure puzzlement. And maybe a little bit of a headache. I’ve always had preference for more traditional songwriting, and the presence of a couple blaring guitars doesn’t hurt. The beaty, blipping abstractions of a group like Aphex Twin wind up sounding like little more than electronic clatter to me. I’ll quickly concede that this is probably mostly attributable to my shortcomings in hearing the inspired musical reinvention without those aggressive tones, but I still wind up turning into that curmudgeonly old man who complains that what’s coming out of the speakers in just noise. Drukqs was a two-CD set, the first released under the Aphex Twin name in about five years. It was also the last full-length album using that moniker, which I think was loosely understood at the time. There may have been some other EPs or other releases by Aphex Twin after that, but James’s discography honestly leaves me as spun around and perplexed as his music.

Previously…
An Introduction
50 and 49: Creeper Lagoon and Ryan Adams
48 and 47: The (International) Noise Conspiracy and Black Rebel Motorcycle Club
46 and 45: Spoon and Black Box Recorder