This series of posts is dedicated to the many, many six packs, pony kegs and pints that have sauntered into my life at one point or another. 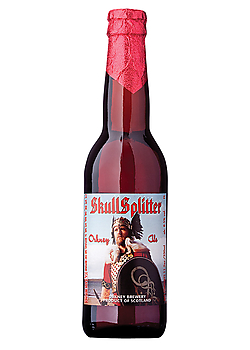 Some beers I know well. Some beers, on the other hand, I’ve seen the twisted metal and cracked pavement they inflict in the delectable car crash of their consumption. My friend Scott was ahead of his time, an erudite connoisseur of the vast spectrum of high-quality beer well before the craft brewing boom. At our urging, he once provided a list of his ten favorite beers of all time, and I remember puzzling over it, stunned at names so foreign to me that they may as well have been ripped from the back pages of The Silmarillion. Over a decade ago, we were preparing to move away from Wisconsin, and we decided to have several celebratory events with good friends who we knew we’d now see far less often. For one of those humble get-togethers, we decided to surprise Scott by getting as many of those ten beers as we could, which was surprisingly few in a state that aggressively catered to beer drinkers. One of them that we did manage to secure was an imposing looking scotch ale from Scotland’s Orkney Brewery called, even more imposingly, Skull Splitter. Unfortunately, we also perpetrated the inadvertent unkindness of showing a pirated copy of The Star Wars Holiday Special that night, a Lucas-approved affront against the sanctity of the Jedi-verse that caused Scott, a devoted Star Wars fan whose affection for the series had been tested by The Phantom Menace but had not yet faced the soul-draining miseries of the two follow-up films, to down the Skull Splitter at a rate that may not even been suitable for the tainted tap water that is Budweiser. Needless to say, this did not end well. Even though I’ve repeatedly and regularly consumed many beers that are actually significantly more potent than Skull Splitter in recent years, I remain leery of that particular beverage. I’ve seen the damage it can do.

25 thoughts on “Beers I Have Known: Skull Splitter”