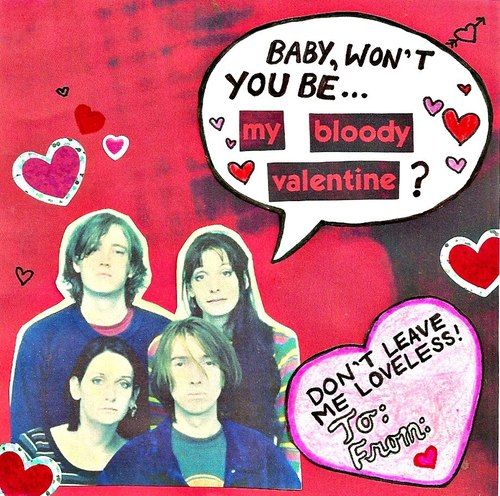 This isn’t usually the digital corner where I share my thoughts on new releases (that’s done elsewhere), but I got a special request from a good friend so here we are. Maybe this will be a one-off, maybe the first of many.

Here’s my true confession about My Bloody Valentine: I didn’t grasp the significance of the band the first time around. I didn’t even get just how good they were. Part of that was because their true masterwork, 1991’s Loveless, initially struck me as part of a trend instead of a buzzy revolution all on its own. It was released the very same day as the superficially similar Bandwagonesque by Teenage Fanclub, and that was the album that hoovered up all the college radio attention during that fall. What’s more, U2, a band my particular college radio station was still very much devoted to, was a couple weeks away from releasing Achtung Baby, and we were all very invested in puzzling out what the dark disco of lead single “The Fly” foretold for the new album. Maybe some of my cohorts immediately understood that Loveless was a major release, but for me it was just another fuzzbomb I pulled off the shelf, played, liked and left to soften in my memory. I didn’t even own a copy of it until years and years later, when it already seemed like any new music from Kevin Shields and the band was a lost cause.

Now, twenty-two years later (realistically, more like twenty-one since Loveless arrived in November of the year, and the new release is hitting in February, but that’s not how we do this sort of timeline math), the unlikely has occurred and the third full-length release from My Bloody Valentine is a reality. Officially, My Bloody Valentine broke up in 1997 and reunited ten years later, supposedly working on new material and eventually playing the rare but impactful live gig. Trying to trace the band’s progress in the time between official full-lengths is tricky, though, as the rare cover song occasionally popped up, and some accounts make it seem like Shields never truly stopped working on new material. Indeed, new album m b v is reportedly drawn from all different points of the last two decades, and the resulting hints of disunion are one of the major parts of the record’s appeal. It almost seems that Shields and company are trying to present everything that could have been–every wrinkle, shift and derivation–across a mere nine tracks. It’s unmistakably My Bloody Valentine, but, taken as a whole, there are enticing hints of journeys partially taken.

Right from the beginning, the band reasserts itself, cementing its sonic identity for any who worried this might be nothing more than some wan echo of past glories. Album opener “She Found Now” announces itself with a surge of guitar buzz like a frothy, crashing tide. The vocals float amidst the sludge like wisps of smoke trying to escape a murky cave. The other thing that’s distinct and noticeable right away is an odd wavering quality to the music, almost sounding as if it’s being played from a warped record or a damaged tape. That persists throughout the album, especially on the first half (not having Loveless memorized, I was surprised to revisit it and find the effect present there, notably on the brief “Touched”), giving it an almost a feel of the unreal, perfectly suited given that it still seems like more of a mirage than a genuine release. The familiarity of the music continues on “Only Tomorrow” and “Who Sees You,” which can come across as Loveless being stretched like taffy.

Then the changes start to creep in. “Is This and Yes” is as ethereally sedated as any Cocteau Twins song, but has some of the spooky wonderment of the Flaming Lips when Wayne Coyne’s drugs (presumably) are really kicking in. “New You” almost sound like My Bloody Valentine striving for a hit, the rough affectations toned down enough for Bilinda Butcher’s vocals to shimmer to the surface, even if she’s delivering more of a melody than any sort of discernible lyrics. To my ears, there’s nothing better on the album than the pile driver instrumental “Nothing Is,” a blast of industrial blast seemingly designed to leave dance floor attire soaked with sweat by time time its three-and-a-half minutes is complete.

All in all, m b v is the indication of a band that still has something left to give. It’s not the sort of elaborate artistic pinnacle that justifies the slightly unhinged and lengthy journey required to make it, nor is the kind of disappointing attempt to replicate the past found on other recent long-gestating reunion efforts. Strip away all the history and expectations, everything that no single album could ever live up to. What’s left is a fine album, one that’s worth having. For just about any other band, just about any other album, that’s a win. It should be for My Bloody Valentine and m b v, too.

One thought on “Love? Less.”