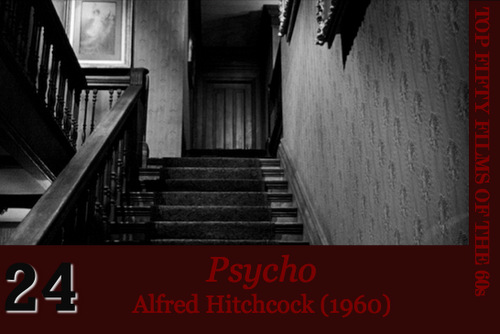 #24 — Psycho (Alfred Hitchcock, 1960)
For obvious reasons, I don’t expend a lot of words in these pieces examining the flaws, small as they might be, that might exist in the films that made my ranking, but let me start by acknowledging the problem of the psychiatrist scene in Psycho. Perhaps Alfred Hitchcock’s most famous film is taut, riveting, uncompromising and deeply suspenseful for the vast majority of its running time, and then in the closing minutes comes Dr. Fred Richmond (Simon Oakland) to explain at tedious length all the theories that explain the murderous madness of Norman Bates (Anthony Perkins). It’s a low-moving narrative mudslide, obliterating everything in its path, but fully in keeping with Hitchcock’s fascination with the field of psychiatry, seen most notably in the feature-length head trip Spellbound, released in 1945. As an filmmaker whose career was dominated by explorations of the darker side of humanity, Hitchcock had an understandable interest in explanations for how his characters got ensnared in their deepest psychic traps. That doesn’t necessarily mean he knew how to dramatize that. The sequence in question in Psycho is arguably the worst scene in a great movie, bad enough that some writers conjure up conspiracies of artistry to justify it. And yet the film is utterly fantastic, otherwise as good as anything one of the greatest directors in the history of the medium ever created. It stands as a refutation of Howard Hawks’s famous (and largely accurate) assessment: “A good movie is three good scenes and no bad scenes.”

Surely no one’s actually been surprised by any of the tricky turns in the Psycho storyline for many years, decades even. Part of the pleasure of watching it is in fact seeing how stealthily the film’s secrets are hidden, the millimeter of space between Hitchcock’s royal flush and his hefty torso. Through much of his career he emphasized revelation as the key to suspense–the bomb beneath the table needs to be seen by the audience so they feel anxious about the danger which the characters remain oblivious to–but Psycho is in many ways the opposite of the practice that typically served him so well. It succeeds largely because of the way it sets up expectations only to demolish them, including precisely who rips opens that shower curtain and how long that nice Janet Leigh is going to be in the picture. The director’s command of the mechanics of narrative always gave him the ability to play the audience like a chess master against a novice, but the few other instances when he did it with the same level of ruthless brilliance.

While the film of course belongs clearly and completely to Hitchcock, as most of his films did, special credit needs to be given to Perkins for his performance as Norman Bates, absolutely instrumental to the impact of the work. With a feigned naturalness that plays as awkwardly endearing, Perkins signals all the ways that Norman is a broken little boy, nervously interacting with the intrusions of an outside world that springs all sorts of uncomfortable feelings on him. That Perkins never fully escaped the role is a testament to how deeply he inhabits the character, creating an eternal association. Hitchcock’s regular collaborators–notably Saul Bass and Bernard Herrmann–also provide their usual invaluable support, but it’s Perkins who contributes something unique within the master director’s oeuvre by finding the paradoxical innocence at the heart of the story’s unexpected evil.