When the U.S. version of The Office stumbled to the finish line this past spring, the consensus was that the show never should have tried to outlast Steve Carell’s interest in playing Dunder Mifflin Scranton brand manager Michael Scott. On the basis of the show’s final stretch–especially the dismal last season that completely misjudged audience curiosity in the fictional backstory behind the documentary conceit–that’s a qualitative assessment that’s almost inarguable. Thinking back on the nine seasons of the show, though, it’s clear that The Office peaked early, even though it has a somewhat notorious reputation as a slow starter. The Office was a consistently amusing program for the bulk of the time that Carell was the star, but it was only truly great in its second season.

And the second season was especially early in its run, considering that the first season was more of an extended tryout, only six episodes long. Even with that, the pilot was little more than a overly faithful adaptation of the first episode of the original British series, which was created by Ricky Gervais and Stephen Merchant. The near-total abdication of establishing a unique voice was so evident in that first episodes that it practically has a patina of flop sweat on it. Even as it got better (and it did, quickly), it also got darker, even meaner. It’s a wonder NBC renewed it.

When it returned for the second season, the show was markedly better. Amazingly, it achieved this without drastic changes. There were no significant casting shuffles and the core creative team remained the same (aside from the necessary credit for Gervais and Merchant on the pilot, there were five credited writers across the first six episodes, and they accounted for six of the first seven episodes of season two). Indeed, the most noticeable alteration was a more becoming hairline for Carell. And yet everything was calibrated just a bit, just enough. Elements that were overly harsh a few months earlier were now ruefully funny, and the occasional glimpses of outright hostility were largely replaced by strained affection. Vitally, the office itself now seemed like a fairly enjoyable place to peek on it, without compromising the show’s main mission of depicting the inherent miseries of cubicle life. If Michael Scott was going to be an inept manager, who slipped away in the middle of the day to shop for condos (under the auspices of attending an important meeting), it would be an opportunity for play and camaraderie among those left behind. The bad decisions of the boss, previously stirring nothing but misery and embarrassment, were now occasionally a sneaky blessing.

Maybe more importantly, the producers needed to deal with something that Gervais and Merchant, taking advantage of the British television model of short runs, never really needed to fret about: demonstrating how this bad boss keeps his position. For me, there’s no more critical episode in the run of The Office than “The Client,” because it establishes that Michael Scott, exasperating as he may be, is actually pretty good as his job. When he and his direct supervisor, Jan Levinson (Melora Hardin), take a prospective client out to a business dinner at Chili’s, Michael’s various squirrelly antics are the same as those that cause disruption in the workplace. In this setting, however, they’re a virtue, eventually winning over the client, who opts to give his business to Dunder Mifflin, even though they’re going to be more expensive. Every business book lesson on respectability that Jan wanted to adhere to was wrong in the real world of dealing with decision-makers who finally want to buy from people they like. On some level, Michael knows this, knows that prompting a happy sing-along of the baby back ribs jingle is going to be a more effective way of closing the deal than earnestly setting forth the virtues of the product and company. This is also significant as the episode that throws the first match on the oily rag pile that is the Michael-Jan relationship, but it’s the establishment of Michael as more innately skillful than Gervais’s David Brent ever was that is pivotal to the storytelling success of the whole series.

There’s a simpler way to determine the best season of a comedy, of course: answering the question of which one was the most consistently funny or even had the highest peaks in that respect. A strong contention can be made for season two, filled with episodes that ingeniously play of the characters’ various neuroses and needs, especially those attached to Michael like rabid barnacles. In this area, writer-actor Mindy Kaling can claim to be a mighty MVP contender for the season by virtue of penning season opener “The Dundees” and late-season winner “Take Your Daughter to Work Day,” but it’s the hilarious “The Injury,” arguably the comic pinnacle of the entire season, that’s the strongest argument in her favor. Beginning with the absurdity of Michael burning his foot on a Foreman Grill he keeps in his bedroom to prepare morning bacon, the episode builds beautifully from there. By the time Dwight Schrute is yelling, “You can’t fire me, I don’t work in this van!” the show is at the rarest of heights. 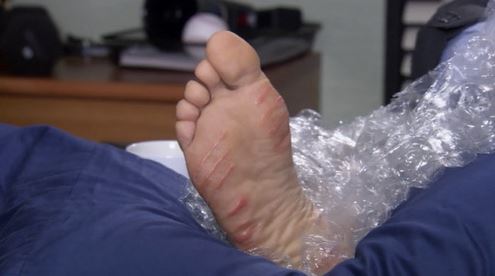 The second season of The Office is the beneficiary of the normal strengths of a show early in its run, one that still has the freshness of discovery. All of the different character pairings haven’t yet been exhausted and its easy enough to built in conflict and complication without needing to tread into overly convoluted dramatic territory. A salesman can still pine for the engaged receptionist in a poignantly secret love without a whole lot of extra obstacles being dragged out of the writers’ room to be set between them. To the show’s credit, the romance of Jim Halpert (John Krasinski) and Pam Beesly (Jenna Fischer) was one of the strengths through most of the run, at least until the creators unwisely tried to turn it into some weird drama of dismay in the final season, complete with a threatened interloper into the relationship from the documentary crew. It was at its most endearing and heart-rendering in the second season, in large part because it could follow that familiar and satisfying will-they-or-won’t-they trajectory that has be the standard sitcom arc since Sam Malone watched Diane Chambers walk into his Boston bar. There’s a reason it’s been used over and over again: when it works properly, it gives a sitcom a welcome emotional core that grounds the comedy. The Jim and Pam dynamic worked like few others, in part because it was more determinedly real than most, most notably in the season two finale when Jim finally confessed his affection to Pam in scenes that disregarded any supposed needs for jokes in favor of letting it play out with a crushing hesitancy, awkwardness and honesty.

The Office stayed fairly strong following season two, but little flaws started cropping up right away. The following season would deserve a demerit simply for the sin of introducing Ed Helms’s Andy Bernard, a character that grew increasing tiresome over the remaining run of the season until he became completely unbearable. But the other cast addition picked up from Jim’s season three transfer Stamford, Rashida Jones as a new love interest for Jim, was problematic in a different way, as the writers had almost no conception as to how to make her interesting. The show that had deftly given vivid inner lives to the characters around the fringes of the office was ineffective at expanding its scope further, which would become abundantly clear in later seasons when Andy Bernard grew more prominent and the entirely unsuccessful attempt to fill the void left by Carell’s season seven departure. Coupled with occasional issues involving both Michael and Dwight coming off as too buffoonish, the show gradually became a victim of its own success. Even the extra seasons past the point when they should have turned the copier off for good are attributable to that specific problem.

None of those issues crop up in season two. Across these episodes, as the show’s popularity was just starting to swell, it’s a series that’s hungry, inquisitive and adventurous, committed to its storytelling without feeling obligated, either to serve fans or to prolong the run. It’s clear that the slippery ice of the earliest episodes instilled in the entire creative team a conviction to get their footing right when they came back to work on the second season that must have seemed like a gift. If that was the goal, they achieved it. And then some.

6 thoughts on “That Championship Season — The Office, Season Two”