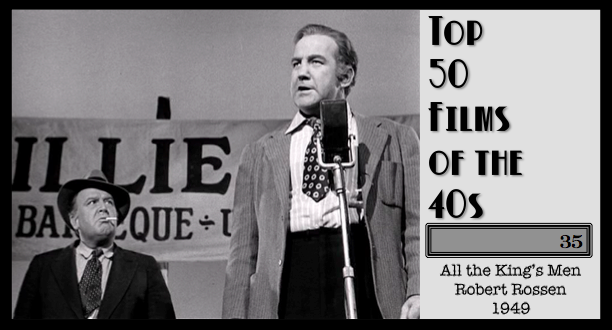 Robert Penn Warren’s novel All the King’s Men was first published in 1946, just a few years after he left a teaching post at Louisiana State University. Warren openly acknowledged the heavy influence his time in the Bayou State had on his best-known novel. Willie Stark, the central character of the book, was inspired by Huey Long, the famed and infamous governor and senator from Louisiana who was known for the power he wielded and the astonishing levels of corruption that ran through his career. The totality of the United States political experience — its triumphs, its innovation, its connectedness to the populace, its brutality, its cynical calculation — were distilled down and channeled into this one individual. Warren wasn’t just interested in the bare mechanics of Long’s rise, but also — perhaps even more intently — in the swarm of tall tales that accompanied it. In considering All the King’s Men, Warren once wrote, “There were a thousand tales, over the years, and some of them were, no doubt, literally and factually true. But they were all true in the land of ‘Huey’ — that world of myth, folklore, poetry, deprivation, rancor, and dimly envisaged hopes.”

Warren won the Pulitzer prize for the novel (years later, he also claimed Pulitzer for poetry, making him the only writer to date to win for both fiction and poetry), and it was quickly spun into Hollywood’s path, positioned as a guaranteed prestige picture. The film version was produced, adapted for the screen, and directed by Robert Rossen, making his inaugural effort under a new contract with Columbia Studios that gave him significant creative control over at least half of his output for the company. Rossen was politically-minded (it was his part in a labor squabble with Warner Bros. that ended his relationship with that studio a few years earlier) and his determination toward intellectual truth shapes the entire film. In the reckoning of All the King’s Men, power corrupts thoroughly and indiscriminately. Yet there’s no black-and-white judgment to the film. Willie Stark (Broderick Crawford, utterly ferocious in an Oscar-winning performance) is a bad man who does good things, governing with a populist streak that undoubtedly betters the lives of his constituents even as he casually abuses the authority given him. All those around similarly cave to temptation at one point or another, even if the infraction is little more than passively accepting the corrosion of a system they once championed as the ideal vehicle for positive social change. Souls are eroded, and all involved simply acquiesce.

The source material offered Rossen plenty to work with, maybe too much. The director had a hard time wrestling the project into a reasonable length, eventually leading him to direct the editors to go at the accumulated footage aggressively. Besides cutting the runtime in half, the strategy created an uncommon dynamism that heightens the tension of the entire work. The very rhythm of the film is difficult to pin down, giving it a more modern feel that accentuates the astute pessimism of the work. It would be nice to peg All the King’s Men as a snapshot of a particular point of time in the ongoing American experience, when the acceleration of opportunity outpaced the ability of the citizenry to properly monitor their elected officials, but that would be the height of naivete. What make Rossen’s film most notable is the enduring quality of its many tough truths.