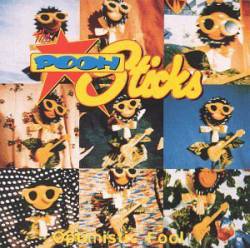 The Pooh Sticks were one of those bands that received lavish praise from certain quarters, but rarely made much more than marginal headway with anyone other than music critics. That’s probably chiefly attributable to the annoying little detail that the band were little more than an elaborate put-on, the brainchild of Fierce Recordings co-founder Steve Gregory. The music indulges in tried and true rock posturing, tugging the the tropes through a filter of Pavement-style self-satisfied arch mockery. I suppose that’s great for some (there are an awful lot of Pavement devotees, after all), but i can’t help but see the phoniness behind the peeling paint. Optimistic Fool, steeped in power pop grandeur, was widely considered the point where the joke ran thin. It was the band’s last album. They were officially disbanded in 1995, though there have apparently been some reunion gigs in recent years.

At the beginning of it all, the attention bestowed on Ben Folds Five was essentially predicated on a pair of gimmicks. The first was that number in their name, a bit of mistaken addition given that the group was a trio rather than a quintet, precisely the sort of dopey factoid that radio deejays can’t resist when trying to figure out what to add to a playlist. Give a deejay something handy to talk about and airplay is sure to follow. The second was presented a major selling point back in the day: the band’s self-titled debut didn’t have a single guitar on it. The guy who lent the band his name played piano, Darren Jessee played drums, and Robert Sledge played bass. A couple string instruments cropped up on the album, but there wasn’t a single guitar, which seemed like the height of novelty when radio was dominated by grunge bands that sometimes sounded like big, intimidating six-strings were the only instrument they gave a damn about. Considering further than Ben Folds Five announced with the single “Underground” that they were going to be far cheekier with their material that the prevailed anguished solemnity of the day, the contrast they provided was downright irresistible.

Even aside from the resounding differences embedded within it, Ben Folds Five is an utterly fantastic album. Tuneful and brash, alternative between jubilant and surprisingly wistful, the record unfolds with a unyielding spirit. Yes, there are dashes of humor throughout — besides “Underground,” there’s a satiric sting to familial misery of “Uncle Walter” — but the album mostly taps into a certain vibe of pushing into adulthood with a keen understanding of the heavy emotions it carries, a downbeat assessment that is buoyed by spectacularly complex and potently exuberant music, as when “Where’s Summer B.?” digs into a pick-up sticks tangle of friend group dynamics: “Dave’s been a mess since Cheryl left/ Just sits at home and beats back death/ And Beth still wears that stupid dress.” And as someone who was feeling the newfound geographic distance from those college friends who represented some of the most important relationships in my life, I could intensely relate to the opening lyrics of “Alice Childress,” which found Folds singing, “Some summers in the evening after six or so/ I walk on down the hill and maybe buy a beer/ I think about my friends, sometimes I wish they lived out here/ But they wouldn’t dig this town/ No, they wouldn’t dig this town.” That’s part of the album’s strong sense of being adrift, lost in a muddle of shaky identity formation, exemplified by “Best Imitation of Myself,” a song that was more of a personal anthem than I should probably admit.

For some of those mid-nineties alternative music fans, maybe stung a bit by the mockery of their scene   found in “Underground,” it was easy to tag Folds and company as distastefully unhip, the piano marking the band as descendants of Elton John and Billy Joel rather than the hard rock heroes whose spilled ink swirled through the Seattle sound. And there are moments when the comparison is apt, albeit briefly. “Boxing” opens with the sort of melancholy melody Joel was always scratching around at — it sounds a little bit like the great “Vienna” — but Folds shows his distance from the elder piano men by bypassing their Tin Pan Alley sensibilities to make the song a metaphorical consideration of the brutality of life through a bedraggled fighter conducting what seems to be one last interview. This is Folds at his best as a songwriter, finding universal poignancy in something specific and unexpected. That talent is laced throughout Ben Folds Five, “Boxing” is just the song in which it is writ largest.

During their initial pass as a band, there were three albums from Ben Folds Five, culminating in the incredible The Unauthorized Biography of Reinhold Messner. Folds made some solo records, provided the songs for an animated feature, and had a long digression into championing a cappella singing that now looks like he was simply ahead of his time. There was also the occasional reunion of Ben Folds Five, including at least one more album release.

Just about any band that could claim a Seattle zip code was destined to be big in 1995, the extended fallout from Nirvana’s Nevermind still completely defined what was played on alternative radio. So surely a band that pulled members from several of the established acts of the day was destined for commercial greatness. In what was probably a bad sign for the side project supergroup’s longevity, it started with a chance encounter in rehab. Pearl Jam guitarist Mike McCready was going through a program in Minneapolis when he met bassist John Baker Saunders. They started playing together when they got back to Seattle, recruiting Screaming Trees drummer Barrett Martin and Alice in Chains lead singer Layne Staley, the latter recruited in part in the hope that being with recovering addicts would inspire him to tackle his own sizable substance abuse problems. The music on Mad Season’s debut release, Above, was glum and plodding, right in line with everything commercial alternative radio couldn’t get enough of. Above was also the Mad Season’s final album, with the group never able to reconvene after everyone went back to their day bands. Saunders died in 1999 and Staley followed in 2002, both due to their continuing problems with drug addiction. There have been various attempts by McReady and Martin to launch a new version of the band — including a version when Saunders was still alive that would have replaced Staley with Mark Lanegan and redubbed the group Disinformation — but none of them have fully took, although the occasional reunion outing still takes place.