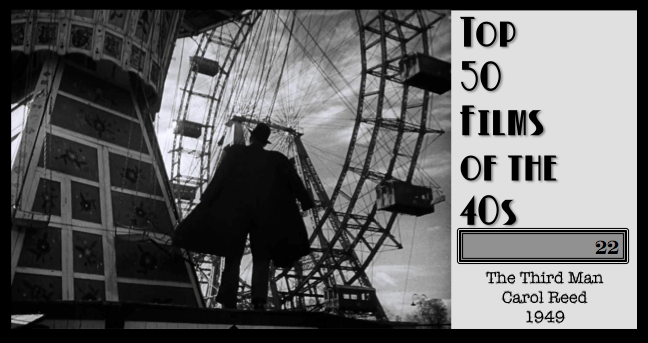 I need to begin with a confession. As might occasionally be the case in a lifelong journey through film, I was initially wrong about The Third Man. First encountering it in a college film class (or, to be more precise, an English class taught by a movie-crazy professor who found a way to wrangle her passion into three credits worth of her teaching load), I found Carol Reed’s lush film noir to be, well, dull. It’s too long ago for me to pinpoint what triggered this reaction, especially when refracted through my later assessments of it. Did I entirely miss the film’s mordant wit? Was the overwhelming sense of mood too hard for me to push past to properly enjoy the intricacies of the plot? Maybe I was simply having a bad night. Beyond the faultiness of memory, it’s hard for me to parse what eluded me. The Third Man is intoxicating in its grandly beautiful noir trappings, bracing in its cynical appraisal of the world, and icy cool in its manipulation of narrative. As I noted, I was wrong.

The screenplay by Graham Greene (he also repurposed the material into a novella) follows dime store novelist Holly Martins (Joseph Cotten) as he travels to Vienna at the behest of his old friend Harry Lime (Orson Welles). Upon arriving, Holly is told that Harry died a few days earlier, felled after being hit by a truck. Problematic elements immediately begin skittering from underneath the baseboards, with various shady individuals casting aspersions on Harry’s character and Holly receiving ominous warnings about what might happen to him if he lingers too long. Naturally, all this spurs Holly to start investigating, increasingly sure that there was nothing accidental about the incident. From there, the craftiness swells, taking some of the double-back trappings of film noir stories and investing them with a swooping elegance.

Carol Reed directs the film with a riveting fluidity and a heart appreciation of all the ways that shadows are a cinematic gift. While the narrative often clicks along with the ruthless efficiency of a crime thriller, Reed sometimes approaches the material with the shifting uncertainty of a horror film. There are suspenseful passages that rival the ruthless peaks of Alfred Hitchcock. And then there’s the performance of Welles. It’s one of the relatively rare instances on film that Welles doesn’t burrow deeply into the comfort of heavily theatrical makeup and thick costuming. Instead, he draws of his often underutilized charisma, building a character that’s enthralling in his suave danger. Though he doesn’t exactly rack up a lot of screen time, Welles commands the film, so much so that it almost feels like it belongs in his vaunted canon as a filmmaker, nearly as much of a personal statement as one of the masterpieces for which he sat in the director’s chair. That’s not mean to belittle Reed, who does a magnificent job. It simply acknowledges the potency of the performance in this perfect merging of actor and role. Really, looking at it now, the pile-up of accomplishment in the film strikes me as practically impossible to miss. At least I eventually figured it out.