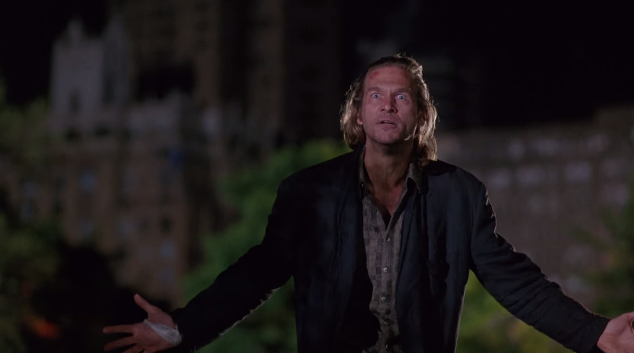 Legacy is a tricky thing for actors. When the time comes to start assessing which films stand as their seminal works, a reckoning that often comes after an obituary has been penned and published, the list of necessary titles might be shaped by factors that stand outside the performances themselves. A film that is considered a classic but might not contain the performer’s finest work takes primacy over a compromised or forgotten outing that ultimately holds within it better or more representative acting. I have a feeling that years from now Jeff Bridges will have two movies associated with his name, at least more quickly than others. One will be Crazy Heart, the decidedly unimpressive country singer drama that won Bridges the Oscar that should have been in his hands much earlier. The other is The Big Lebowski, the Coen brothers comedic riff on The Big Sleep that was a commercial failure upon its release but has become as iconic as anything in the siblings’ filmography, largely because of the agreeably shambolic performance by Bridges as The Dude. Bridges is fine in both films, but neither performance catches what’s really special about him as an actor, notably an ability to ground his craft in thoughtful emotion that feels uncommonly real.

There are better places to look to find Bridges at his considerable peak, many of them clustered around the late nineteen-eighties and early nineteen-nineties, when age had started to build offhand gravitas onto him. Bridges was often called upon to play easy charmers across the first portion of his career. Around the time he turned forty, the opportunity to bring a different edge to his acting emerged. He could go dark, but the charisma remained, making it wholly understandable why other characters would be drawn to whatever prickly soul he was portraying. More importantly, there is that pronounced sense of the real that Bridges brings to nearly everything (he is one of the few actors who could take the role of a space alien masquerading as human in a science fiction romance and deliver a moving performance fully worthy of an Oscar nomination). If a character is a challenging human being, Bridges instinctively conveys whatever inner vulnerability triggers the troublesome nature. One of the reasons Bridges struggles in a straight villainous role, such as the adversary in the first Iron Man, is that the good guys vs. bad guys storytelling ethos repels the nuance that is his greatest strength.

Bridges probably has delivered better performances than the one he gives in The Fisher King, but I’m not sure if there’s another that so clearly demonstrates his natural strengths as an actor. In the film, Bridges plays Jack Lucas, a radio shock jock (to help really solder the film to its 1991 copyright date) whose on-air commentary helped inspire a mentally-unstable man to go on a shooting rampage in a New York restaurant. Cowed by the incident, Jack retreats from his privileged life, winding up as a drunken shambles taking up space in the apartment of Anne (Mercedes Ruehl), a video store owner he met during his rapid descent. His redemption begins when Jack meets Parry (Robin Williams), a homeless man who has embraced madness as an escape from his own ills (which are connected to Jack’s in a way that would strain credulity if not for the film’s deliberately fable-like quality). Parry is on a dual quest for the Holy Grail and the hand of a mousy secretary named Lydia (Amanda Plummer), both of which require assistance from Jack, which he gives with varying degrees of slightly agitated reluctance.

The Fisher King represented Terry Gilliam’s finest two-and-a-quarter hours as a director, and it is the Monty Python alumnus’s propensity for the imposed fantastical that makes the film an ideal showcase for Bridges. The screenplay is credited solely to Richard LaGravenese, but the film is filled with moments that feel like they are the exclusive domain of Gilliam, led by the scene in which Parry trails Lydia through Grand Central Terminal as a busy crowd of commuters spontaneously break into dance around them. The trademark free association freneticism of Williams and the dark whimsy of Gilliam give Bridges wonderfully warped surfaces to play off of. The process of grounding the story in something deeply human and resonantly believable is more challenging and more crucial than usual. And yet it would be counterproductive for Bridges to make Jack too plain, a choice that would reduce the character to straight man instead of compelling protagonist. Bridges makes Jack’s emotional turmoil manifest as a restless physicality, whether drawing up his old radio skills in telephoning Lydia to bestow a faux prize meant to draw her to the video store, slurring through a drunken conversation with a Pinocchio doll, or simply reacting to Parry’s unbridled rambunctiousness. Bridges keeps pace with the rhythm of the film while staying deeply true to his own steady inner compass.

Though Jack has been felled by the circumstances of life, his enveloping funk bears a spiritual resemblance to the loathsome triumphalism he exuded when on top of the media world, a solid line of connection that Bridges draws expertly. Simultaneously, Bridges allows slight glimpses of Jack’s capacity for healing, for growing, for becoming a better man, whether in the handful of gentle moments with Anne or his capacity for calmly pressing forward with a plan to help Parry that involves collaborators who intrude upon his preference for an existence shorn of any tinge of flamboyance. Thanks the skill of Bridges, Jack’s transformation doesn’t take place as the stirring epiphany that most movies favor, but is instead is presented as the gradual shift of a whole soul. Through knowing how to play Jack’s consistency and his contradictions at the same time, Bridges brings the character’s many truths to the forefront. It is clear to see who he was, who he is, and who he can become, often all at the same time.