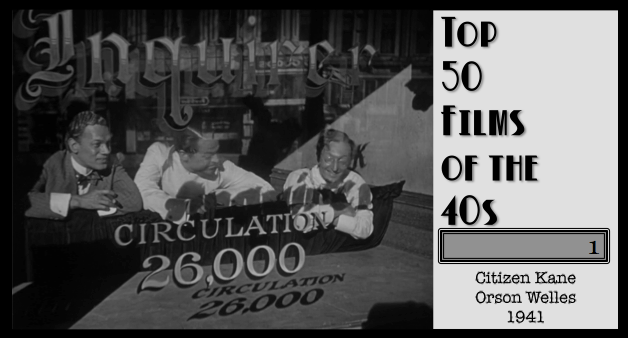 Back when I had my first opportunity to share my opinions on the vast swath of cinematic offerings, foisting thick clusters of film criticism upon the defenseless radio listeners of Central Wisconsin, I took the task of crafting lists very seriously. The only time that particular duty really came into play was as one film year gradually gave way to the next (for those of us well-removed from the major metropolitan areas and the eager attention of studios and publicity agents hoping for consideration for timely awards seasons accolades, we were lucky if the required viewing for the preparation of a proper top ten list was completed by February), but I agonized over my tally, tinkering with the procession of titles, as if trying to land on the sequence that would disarm a cluster bomb surreptitiously nestled in the heart of Times Square. I have, it’s fair to type, gotten far more relaxed about it, usually proceeding with something that bears a marked resemblance to my first pass at the ranking.

The above is an acknowledgment that I would very possibility wind up with a noticeably different ranking on any one of these Top Fifty lists were I to start them over from scratch, allowing myself no reference check against what was posted previously. But then there are the consistencies, the placements I know would remain as true and unyielding as King Arthur’s sword pin-cushioned into rock. Those are largely, as might be expected, the titles at the upper reaches of the lists, especially those nestled into the top spots. Even then, some are more certain than others. There was never a doubt — not even for a millisecond — that I’d end this year of tracking through my favored films of the nineteen-forties by writing about Citizen Kane. While I’ve occasionally been somewhat out of step with the broader critical consensus in the arrangement of my lists, leaving revered offerings such as The Godfather and Vertigo below their commonly expected heights of praise, with the placement of Citizen Kane I am so stolidly conventional that my selection is almost quaint, borderline antiquated. After decades as the default choice when identifying the pure pinnacle of cinematic achievement, the directorial debut of Orson Welles has been sliding from favor just a bit, seemingly a result of critical boredom rather than an actual reassessment of its merits. I think that’s ridiculous. To my mind, Citizen Kane remains the best film ever made.

The story of Charles Foster Kane (Welles) anticipates the career path that would be taken by the man who helped invent his life (though there are disputes about authorship, the Oscar-winning screenplay is credited to both Welles and Herman J. Mankiewicz), from meteoric rise fueled by charm, luck, and fearless ingenuity through tumultuous success and melancholy failure before finally settling into broken loneliness with shadows of the lost past dancing in the corners. Welles, given a generous contract and nearly unprecedented creative control following his radio production of The War of the Worlds which became a sensation, approaches the standard “great man” story with an devilish impulse to tear it apart to its rickety pieces. In doing so, Welles takes the same approach to the narrative structure of cinematic storytelling, no longer in its infancy but still young enough that it teetered a bit as it strode forward. Welles was hardly the first to follow an experimental impulse in his filmmaking, but I can’t think of an earlier example of a film that so expertly deployed the grammar of cinema while simultaneously deconstructing it with ruthless glee. It’s now been over seventy years since the release of Citizen Kane. Portions of it still feel revolutionary.

Welles packs so much story into the movie that it moves like a cyclone, and yet it is also fully tamed. Welles measures out the turns in the story shrewdly and with care, shifting between punchy theatricality and tender subtlety. Maybe more than anything else, Welles was a showman, an impresario with a gift for high art and a weakness for moments of melodrama. At times, Citizen Kane seems like a showcase for every possibility that cinema holds, like it could be broken down to about two dozen demo reels. Even so, the flow of the story and the cunningly drawn characters prevent it from devolving into nothing more than a technical marvel. The justly vaunted cinematography of Gregg Toland can be studied as its own towering achievement, but it never threatens to outpace the film itself. It is a critical piece, another component of the magic trick Welles is patiently pulling off.

Citizen Kane, famously and sadly, was not considered a success in its day, and RKO regretted the latitude they’s provided to Welles. Across the rest of his life, even after Citizen Kane achieved elevated status in the critical community, Welles never again operated with the freedom he had on this film. From then on, every work was compromised, one way or another. There a satisfying bleak romanticism to that, the tale of the perpetually thwarted artistic genius. It suits the rueful assessment of life that threads through the film. Much as Welles would have probably preferred an easier professional path, at least he left this one flawless rendering of all the possibility he could muster. He made other excellent films, but he didn’t need a roster of achievements to secure his place in movie history. He made Citizen Kane.

One thought on “Top Fifty Films of the 40s — Number One”