It probably makes sense that Polly Jean Harvey has reach the point of full-on art installation, like Björk at MOMA. Disastrous as that particular exhibition may have been, it was indicative of a certain truth in the notion that the Icelandic performer in her overt and unyielding multifaceted creativity had reached the point where the standard progression of record and tour followed by another record and another no longer seemed sufficient. Similarly, when Harvey released the exemplary, transcendent Let England Shake, it really did seem that she’d come to a creative endpoint, exhausting all the possibilities of the album format. And that was before she become the first (and, to date, only) two-time winner of the prestigious Mercury Prize. Let England Shake was majestic in its accomplishment, serving notice to albums that were mere collections of songs while still standing as a pretty fabulous collection of songs.

Under the title Recording in Progress, Harvey toiled on her new album as an act of public exhibition. Behind glass, Harvey worked with longtime collaborators John Parish and Flood to develop material that would become The Hope Six Demolition Project. In some respects, the new album can be viewed as a companion piece to Let England Shake, shifting the fierce animosity against roiling, governmentally-instituted injustice from from that perpetuated by Harvey’s U.K. homeland to the red, white, and blue brand inherent to the good ol’ U.S. of A. The very title of the album refers to the callous acts of gentrification exacted by the federal Hope VI program, all under the deceptive auspices of community beautification. That’s the direct topic of the album’s opening track, “The Community of Hope,” which finds Harvey singing, “Here’s the highway to death and destruction/ South Capitol is its name/ And the school just looks like a shit-hole/ Does that look like a nice place?” before describing the pending erasure by repeating, “They’re gonna put a Walmart here.”

Harvey’s knack for the vivid is at the forefront of the following track, “The Ministry of Defense.” Against a pounding, repeated guitar line and with sharply off-tone horn parts creeping in, Harvey sings, “Human hair/ A kitchen knife/ And a ghost of a girl/ Who runs and hides.” The song hinges on the desperate chorus “This is how the world will end.” Even as the sounds of the track carry a toughness, there’s an unmistakable sophistication to the music, a certainty that it holds intricacies within intricacies. The performer who once expressed herself in a raw, headlong manner that sounded like punk stripped to its steel skeleton now reserves the caustic qualities for the ideas she expresses. Her music has room for the elegance of “River Anacostia” or the stark assurance of  “Dollar, Dollar.”

If anything, the sonic palette is adventurous enough that it starts to swamp out the lyrics, or even make Harvey evidently content to rely on repetition. Where Let England Shake played like a urgent, exhaustive report on an empire crumbled to sad ruin, The Hope Six Project sometimes feels like a junior sociologist’s first pass at a reflection essay. The concepts tend to stay on the surface, with the impetus for outrage offered up as so self-evident that a reasoned, resonant argument isn’t needed. Despite peaks that any artist would envy, Harvey hasn’t been without her flaws across the decades, but I don’t know that I’ve previously found her to be facile. That’s sometimes the case on this album, as if the questing of the creative process was concluded before its time, or least before the lyrics had an opportunity to fully catch up with the music. Even with that troubling veneer of intellectual disconnect, there’s a strong sense that there’s plenty of nuance to explore, that The Hope Six Project will yield discoveries with every fresh listen. Harvey’s overall artistry still prevails, no matter how it’s on display. 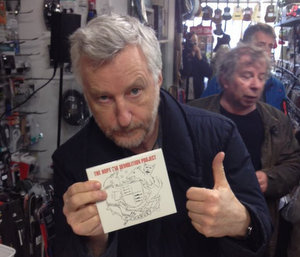