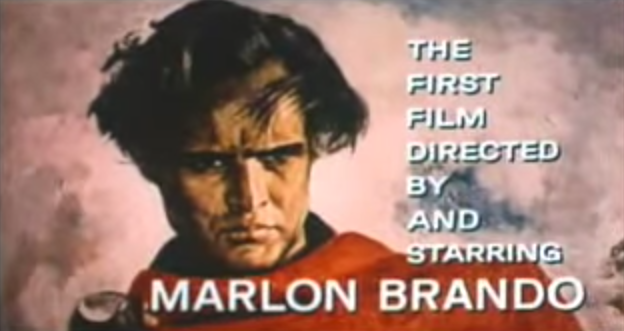 I usually reserve the longer reviews for films still playing in theaters, but sometimes a title I’ve caught up on later merits a few extra words.

Marlon Brando wasn’t well past his peak when he turned in his only feature film directorial effort, but the ground beneath his feet was crumbling. At the time shooting began on One-Eyed Jacks, late in 1958, Brando was less than five years past the triumphant On the Waterfront, and he’d nabbed a Best Actor Academy Award nomination while the same calendar hung on the wall (doing so for 1957’s Sayonara). But there was also hints of the erraticism that would dog his later career and a slightly familiar quality to his once transformative acting approach. Directing the feature wasn’t Brando’s initial intent. He’d specifically sought Stanley Kubrick for the job and worked on the project with him for around six months, until Kubrick became weary of the actor’s restless, meandering creative energies. By the time Brando assumed the director role, it likely seemed the only possible option to all involved. He’d worked tirelessly on the project, sinking his own money into it. He needed control. It was certain to be an expression of self.

In evaluating One-Eyed Jacks, it’s a practical impossibility to avoid viewing it as a piece of the Brando legend, considering it against everything that is known, or at least believed, about the man as an artist. It’s even fascinating that the film falls squarely into the genre of western. It was Brando’s first such outing, even though westerns were still one of the dominant genres of Hollywood cinema when he embarked into the field of moviemaking. Telling the story of an outlaw called Rio (Brando) who emerges from five years in prison intent on tracking down the partner who betrayed him, the film is simultaneously deeply conventional, an obvious kindred to any number of other studio westerns of the day, and roughly sly in its commitment to uniquely exploring the muddy realities behind the Old West fables. When Rio finds his betrayer, Dad Longworth (Karl Malden), he’s become the sheriff of Monterey, California, not so much reformed as a casually ignoring his own past. In this, Brando embraces ambiguity in a way the mirrors his own approach to acting, just as the blunt honesty at the heart of the era’s depiction has a clear corollary in his performances of committed authenticity.

Similarly, the film’s flaws have foundations in where Brando stood at that time, if only in using the compassionate excuse that he was a first-time director. The plot occasionally feels secondary, too much so, as Brando burrows in on the ache of individuals in a way that feels consistent with a creator who is a depth charge actor first and a storyteller second. And there’s even an occasional abruptness to cuts between scenes, as if Brando is continually losing interest in the niceties of narrative structure. Why dwell on a transition when there’s more emoting to get to, more jagged social points to make?

Much as I feel I can see Brando in every frame of One-Eyed Jacks, there is some question about authorship. While Brando surrounded himself with a talented team (including cinematographer Charles Lane, who received an Oscar nomination for the film), the production didn’t go smoothly. The schedule went twice as long as the planned three-month shoot, and the budget similarly doubled. And that was just the beginning of the problems. By all accounts, Brando’s original cut of the film stretched to five hours. He tried to cut it to a more manageable length, but he also had to move on to other jobs, such as the 1959 feature The Fugitive Kind. He was in the midst of shooting that while also editing One-Eyed Jacks when he finally gave up, turning the western he’d spent years developing over to Paramount so they could finish it. They did so, complete with a happy ending, or at least as happy of an ending as could be mustered given the bleakness that was stacked into the story. Brando was dismayed by his battles with the studio, but he also reported he was bored with the film by then.

When One-Eyed Jacks finally opened, in the spring of 1961, it was largely received as a curiosity, more emblematic of the prickly hubris found in Truman Capote’s famed and infamous profile of Brando, published in 1957, than in the challenging intensity of his most revered onscreen work. The spirit of deliberate uncertainty that Brando sought was deadened in the process of getting the film from script to screen. All these decades later, figuring out how to meet the film is exceedingly difficult. There’s a desire to see it as an act of authorship, as is the norm with all cinema truly worthy of evaluation, but how can that approach work when the chief creator walked away, turning it over to the committee of his employers? It surely expresses something about Brando, but how can that definitively be determined when it’s almost impossible to discern where his fingerprints remain and where they’ve been buffed away? It’s a reminder that film is a complicated art form, the winding collaborations, both collegial and unwilling, refuting all attempts to speak with confidence about creative intent. Brando may own a large piece of One-Eyed Jacks, but the tumult of its creation makes an individualized attribution of triumph or failure a plain impossibility. By the time a film belongs to everyone, maybe it really belongs to no one.

2 thoughts on “Then Playing: One-Eyed Jacks”