At the time I started reading superhero comics, figuring out how to follow favorite characters was a fairly simple task. As opposed to the overlapping sprawl of the current array of titles from the two main publishers, which finds heroes with only marginal or obviously fleeting popularity popping up all over the place, being a completist about any given fictional figure’s ongoing adventures was usually as simple as committing to their monthly (or bi-monthly) publication and that was that. There were exceptions, of course. In the case of Marvel Comics, my comic crafters of choice, it took a lot of nickels to keep with all the doings of our friendly neighborhood Spider-Man.

My challenge was a relative shortage of nickels. While blessed with generous familial benefactors supporting my comic-buying habit, their largesse had limits. Typically, I had to settle on only one of the wall-crawler’s three monthly titles on the stands at the time. (Or four titles, if the reprint monthly Marvel Tales is included in the tally.) For reasons I can no longer discern — but perhaps attributable to a tiresome indie cred lifelong instinct toward seeking out the slightly less popular option — I often bypassed the flagship periodical to snatch up issues of Peter Parker, The Spectacular Spider-Man. Even now, I have a stronger nostalgia for the web-slinger’s secondary series.

Launched in the mid-nineteen-seventies, the original concept — suggested by Peter’s civilian name in the title — was that the ongoing series would offer more concentrated glimpses at the hero’s life apart from his costumed crime fighting. By the time I was reading it, any such mandate had slipped forgotten between the cushions. But there was still a sense that the comic existed to exploit the storytelling opportunities creators didn’t have time or space for over in Spider-Man’s main title. Sometimes that could mean a new scrap with one of the character’s oldest foes.

Bringing in major villains wasn’t necessary impetus for long, complicated sagas. Electro was a formidable foe, but his malicious return into Spider-Man’s orbit could still be contained within a single issue, packed tight with plot. In this instance, it helped that the title New Yorker just so happened to be in possession of a rubber air mattress boasting the exact same colors as his famed costume, allowing for an early Project Runway unconventional materials challenges with the grand prize of significantly reduced likelihood of electrocution when battling a supervillain.

Writer Bill Mantlo and penciller Ed Hannigan were the main creators on Peter Parker when I was buying it with some regularity. Mantlo was especially skilled at slipping back and forth between old, well-traveled characters and comparative newcomers, often of his own creation. Most notably, Mantlo and Hannigan introduced Cloak and Dagger, teen runaways whose superpowers derived from their unwilling injection with an experimental drug. 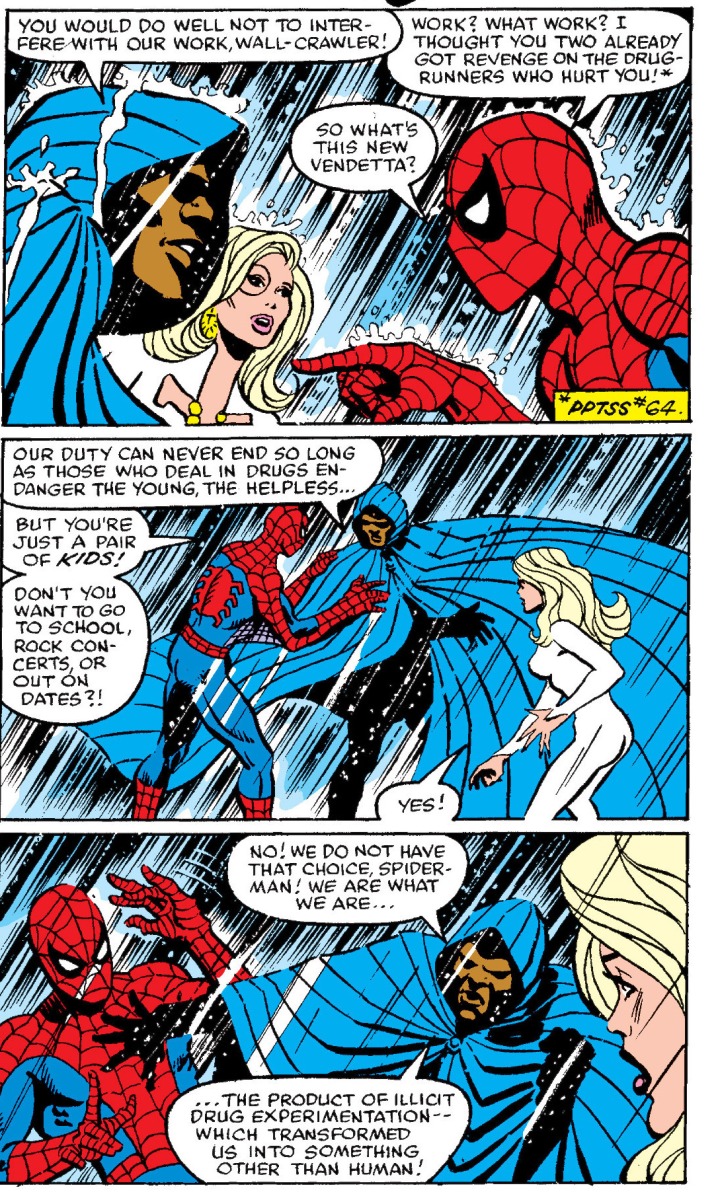 The duo became a quick sensation. They made an encore appearance in Peter Parker less than six months after their first appearance. Around a year after that, Cloak and Dagger starred in their own limited series, which was followed by an ongoing title, albeit one that didn’t last all that long. In the comics, the characters have never quite locked in with the readership the way they did in those early Peter Parker appearances, but that hasn’t stopped them from enduring as a prime part of the increasingly valuable Marvel Entertainment machine.

Correct or not, I had a vague sense that Peter Parker, The Spectacular Spider-Man could go just about anywhere with its narrative, but unlike the similarly freewheeling Marvel Team-Up (also starring Ol’ Webhead) these stories counted. Feeling obligated to maintain a working knowledge of the main avenues of Marvel’s overall narrative, I eventually gravitated more or less full time to the character’s primary title, The Amazing Spider-Man. A portion of my geeky heart remained with the scrappiness of the companion title, though. For me, ahead of all other descriptions Spider-Man will always be spectacular.

One thought on “My Misspent Youth — Peter Parker: The Spectacular Spider-Man by Bill Mantlo and Ed Hannigan”