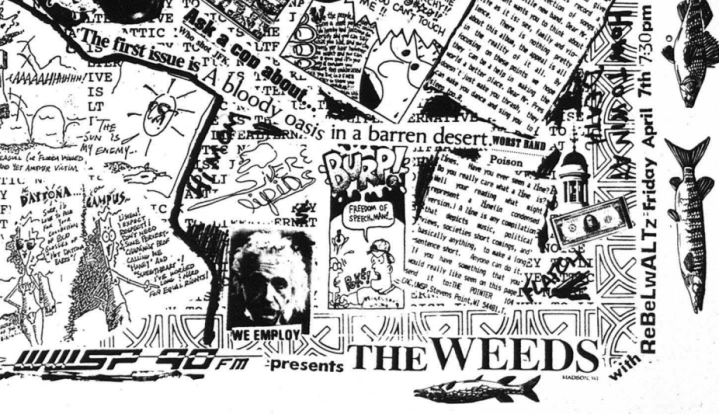 According to the official tally within the digital machinery of this humble corner of the online megaplex, the post that went up one week ago today, boasting a downloadable MP3 of a Was (Not Was) track, was the five-hundredth globule of my words adorned with the informational tag “One for Friday.” Now, human error could render that count inaccurate, so let’s look to a different measure of longevity that is more certain. It was almost exactly ten years ago that I first hyperlinked to a song file and wrote up my memories of it for this gleaming outpost of cultural consideration. In early January of 2009, I shared “Nancy Sinatra,” recorded by bygone Madison, Wisconsin band the Weeds, and One for Friday was underway as a recurring feature.

To a degree, I was simply trying to set a placeholder Friday feature as I migrated from my former online home, convinced the way I was closing out the working week over there wouldn’t work as well here. I was also paying informal tribute to the various music bloggers I admired, especially the proprietor of a site called Little Hits, which has long since shuffled off this immortal plain. I had a big batch of songs, many of them first discovered during my beloved time as a wide-eyed college radio staffer. Streaming music options weren’t as widespread as they are now and YouTube lacked its current infinity jukebox side, meaning a significant number on the cuts in my collection weren’t widely available. I also steered clear of material that could be bought from your favorite local, independently owned record store in a manner that compensated both the proprietor of said store and the original artists. Under those circumstances, sharing seemed a reasonable option.

A decade later, I feel like I’ve come to the end of One For Friday. In addition to the previously mentioned expansion of availability for much of this music, another ten years of distance from the era of most songs that wind up here builds a little mustiness in the whole endeavor. I’ve greatly enjoyed essentially tracking through my first semester in college radio these past few months, opening each post with the legend “Thirty years ago….” I’ve also been mindful of just how far back I’m reaching, the equivalent of the Kingston Trio’s “Tom Dooley” or the Coasters’ “Yakety Yak” at the time I first slid those college rock treasures out of their respective sleeves in the on air studio I once gratefully called home. It’s time to move on.

As part of the above reflection implies, I am somewhat compelled to find a replacement undertaking that prompts me to be a little more current in my weekly music writing. College rock nostalgia is already served quite effectively on Sundays around these here parts. There’s a pledge I still abide by, calling on myself to operate with an approach to listening as committed to the here and now as past favorites. I want that to be reflected more here. Something along those lines will take up residence in this spot next week.

For now, though, One for Friday merits a proper farewell. There’s one one band suited for the task. And so….

A little more than thirty years ago, in the autumn of 1988, the Weeds released their debut album, Windchill. Hailing from the city in which I was born — and which wasn’t exactly a launching pad for acts with a national presence — the Weeds arguably represented the pinnacle of a certain type of gift provided by my college radio. In the station’s Heavy Rotation stack, repository of new records that had arrived in the station’s mailbox over the course of the prior two weeks or so, an egalitarian ethos ruled. Sure, the latest R.E.M. disc was bound to receive more loving attention from the deejays who took turns in the chair behind the main board, but the charge was to explore, to take chances on music we didn’t know and weren’t likely to know about through any other means. No commercial stations played anything from Windchill, it wasn’t going to receive the barest mention in Spin or Rolling Stone, MTV would be no champion for the band’s art. The Weeds had us, and we, in turn, had them.

And the music on Windchill hit me so squarely in my heart it may as well have been implanted there by a skilled surgeon. It’s full of sterling garage rock, further informed and bolstered by the unapologetic ramrodding authority of punk and the stealth songcraft of nineteen-eighties college radio titans. And it possessed a winning brashness that served as a useful proxy for an eighteen-year-old kid just beginning to reckon with his place in adult society, unequipped to articulate the uncertainty he felt when staring down systems rigged against those who weren’t taught the secret handshake by their dynastic families. I wasn’t prepared to thump away at a guitar and howl, “We got dicked!” over and over, but now I had someone to do it for me.

There were bigger, more notable records than Windchill during my first year at the college radio station, but not many. The album got a further boost in the spring semester when the radio station booked the band to play a gig on campus. The record returned to Heavy Rotation and stayed there for weeks, racking up enough spins to wind up among the station’s ten most played albums in 1989, rubbing shoulders with the Pogues and Hoodoo Gurus. I’m confident we were the only radio station in the nation that played Windchill that much. Of course, I also believe that means we were the only radio station in the nation using our airwaves wisely.

(Disclaimer: In this instance, I’m sharing a song the band has already offered for free download, so I’m assuming it’s also acceptable for me to post it here. All are encouraged to grab the other songs they’ve generously released into the wilds of the internet. Every last one is a winner. Although I am sharing the music here in good faith, I do know the rules. I will gladly and promptly remove this file from my little corner of the digital world if asked to do so by any individual or entity with due authority to make such a request.)