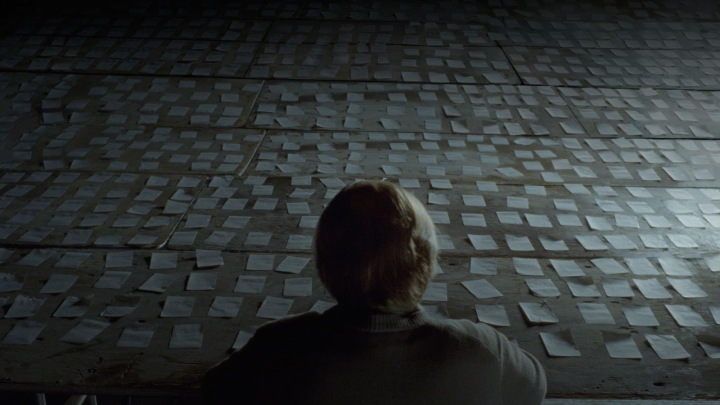 I enjoy tinkering with formats and structure, but I employ the practice rarely. Goofing around for the sake of it feels overly intrusive. There should be a point, as when I spoofed Quentin Tarantino’s title cards to add one more ting of derision to my review of The Hateful Eight or the silly little trick I pulled when writing about The ABCs of Death for Spectrum Culture, a mirror of the movie’s gimmickry. And this big wall of text was constructed in an attempt to replicate the frustrating, impenetrable storytelling of Charlie Kaufman in his feature directorial debut. This was originally published at my former online home.

Charlie Kaufman’s new film is entitled Synecdoche, New York. The Academy Award winner previously scripted such mind-benders as Adaptation. and Eternal Sunshine of the Spotless Mind. This is first time he’s directed. The plot follows a theater director from Syracuse as he responds to some sad turmoil in his personal life by launching himself into a wildly, ludicrously ambitious new project. He uses money received from a MacArthur “Genius Grant” to purchase a cavernous New York City warehouse. Inside, he oversees the construction of a massive set, effectively a reconstruction of metropolis and sets forth a cast of dozens, hundreds, thousands to engage in an ongoing improvisational rehearsal. Around this there are varied romances, an estranged relationship with his daughter and looming medical problems. These are the details of the plot, but it is not remotely what the film is about. The film is about many of the same preoccupations that runs through Kaufman’s most celebrated works like veins under the skin. It is about the the pliability of identity, the shortcomings of art in addressing the messiness of the human condition, the enveloping bleakness of demise looming mercilessly on the horizon, the battle of artifice versus authenticity, the routine madness the infects the world, the haziness of memory as it tries to protect us from our own pain, the misery of being unloved and the inevitability of losing anything that gives us brief tastes of joy and solace. In short, it seems to be about the wounding burden of being Charlie Kaufman. His stand-in is that theater director, named Caden Cotard and played by Philip Seymour Hoffman. Caden is inventive and misunderstood, obsessed by his own creativity and wracked with self-doubt, even self-loathing. He is a stage-oriented extension of the character Kaufman created as his direct doppelgänger in Adaptation. with a MacArthur grant instead of an Oscar to bring a crushing, paralyzing expectation down upon him. If it seemed that Kaufman couldn’t get more insular that he was in writing a film that posited himself as the central character, depicting his own inability to write the very film being viewed, then let Synecdoche prove that apparently sound theory wholly shortsighted. Kaufman addresses his own fears about inauthentic in art by creating a film built upon being inauthentic but continually calling attention to its own inauthenticity and claiming higher, sounder, more artistic truth in that cunning self-awareness. Kaufman’s own falsehoods are cleansed and absolved by his depiction of Cotard’s struggles with finding truth within recreation, or so he thinks. Instead, Synedoche, New York is wearying evidence that when you gaze into the navel the navel gazes back at you. Kaufman’s bundles dense conversations about meaning and genuineness and love and art. They go nowhere. They spin aimlessly, as lost and endless as Caden’s production that never truly begins. It’s so distancing that it imperils the entire film. Even the flashes of insight, the handful of scenes—mostly early on, mostly involving Caden’s soon-to-be-disrupted family unit–that have some sharpness to them, a simple honesty that cuts through the rambling cleverness, feel buried eventually, deemed invalid by Kaufman’s itchy, paranoid judgment against his own words, his own worlds. Maybe the minuscule paintings renders by Caden’s wife are meant to lampoon art world pretensions, or maybe Kaufman is just amused by the visual of people prowling a gallery with magnifying glasses affixed against their brows like headlamps on descending miners. Either way, it’s plausible enough. But what to make of the ticket-seller played by Samantha Morton purchasing a house that always has low but active flames flickering in the woodwork. What does it mean? And how do we take seriously Kaufman’s explorations of the unavoidable deceits of drama when he sticks something so patently phony into the part of the film that’s supposed to take place in the real world, the world that Caden is investing so much effort into capturing? Or is that the point? Caden’s futility is not just a reflection of the inherent limits of artistic endeavor, but the lunacy of trying to depict, condense, render something real from an existence that is in itself awash in fakery? Caden can’t do it because it is impossible. And neither can Charlie. Therefore, this headlong dash into a narrative brick wall is weirdly honorable. The self-absorption is thorough and relentless. The film is a snake eating itself. More than that, it’s a snake in a snake costume consuming the tail, uncertain if it’s eating tail, costume, both, or if the distinction even matters. Whether it even matters is a whole other element. Kaufman has employed a foolproof methodology to make his film impervious to criticism. If the film is irredeemably messy, it is intentionally so, that messiness fully representative of the messiness of life, of art, of art rendering life, and life mirroring art. To call the film a mess, to call it confusing, to call it muddled or indulgent is simply to apply descriptors that bolster Kaufman’s thesis. Pointing out failures is the same as celebrating accomplishments. Everything is spot on right by virtue of being terribly wrong. The artists creates the art until the art consumes him, and that tragic finale, that suicide by creation, is the only acceptable ending in Charlie Kaufman’s reckoning. The impossibility of the endeavor is no more or less demeaning than any number of daily indignities, than the crossed up confusion of language or the sudden, silent endings of those tallied in the newspaper obituary section. Apply any mathematics you like, the sum is always zero. The film is a vicious circle, but the circle is so vast that you will have forgotten the ground you crossed before the journey leads you to recross it. That is, it seems, the way Charlie Kaufman likes it. The way he needs it to be. And all these words I tap out in response are more meaningless than usual. I’m not sure why you’re even still reading. You should have quit long before. God knows, I would have.