By the middle of the nineteen-eighties, I was well-versed in the particulars of the whole Marvel Universe. My resources were meager enough that I couldn’t make the commitment of the fabled “Marvel Zombies,” who bought every single title issued under the publisher’s banner, amassing a complete collection of the ongoing saga of surprisingly relatable superheroes, Still, I did my best, occasionally taking on some outside reading to fill in the gaps. As was the standard of the day, my fandom was monogamous, at least when it came to the big two publishers (indies didn’t count), and so I had only the faintest impressions of the costumed do-gooders and fervent fiends whose exploits were conveyed by the distinguished competition. But I was also committed to to creators, so John Byrne’s jump from Marvel to help usher in a new era at DC Comics meant my eye would start roving at the comics rack. I needed to learn a whole new glittering galaxy. Luckily, the writer-artist’s desire to play with as many of his new toys as possible provided a boost.

Byrne was recruited to take the creative lead on a relaunch of Superman, the company’s flagship character who was at that point fast approaching his fiftieth anniversary. Limited series The Man of Steel started the process, and Byrne also took the title bearing nothing more than the character’s name back to a new first issue, He also took over as the writer and penciler on Action Comics, the famed, historically significant series in which Superman made his debut. Byrne decided to make Action into a series that would regularly pair Superman with other heroes in the DC Universe, making it the equivalent of Marvel Team-Up, Marvel Two-in-One, or DC’s The Brave and the Bold. The choice was a godsend to me, provider a handy primer of these unfamiliar characters just when I needed it. (Another of Byrne’s inaugural gigs in his new home, providing art for the superhero crossover series Legends, was similarly valuable.) 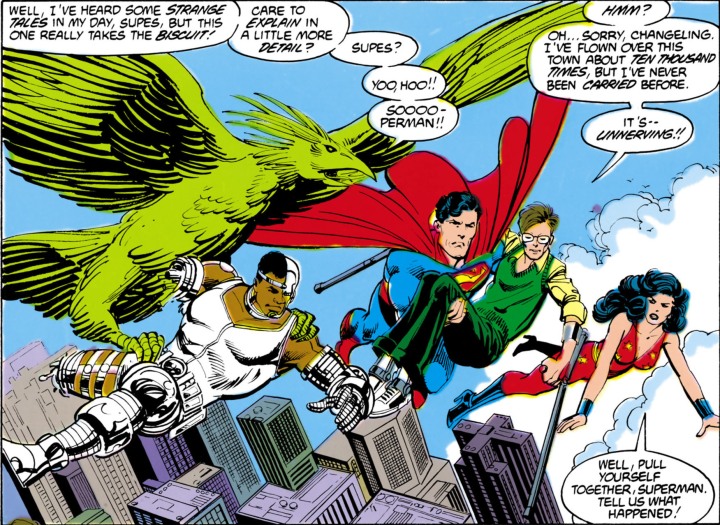 Not everyone of the characters was a totally mystery to me. Perhaps strategically, Byrne kicked off his Action Comics run by having Superman cross paths with the Teen Titans, a group that had run in tandem with Marvel’s X-Men as the blockbuster hits of the first part of the decade. That first issue also established a conceit Byrne used a decent amount in these team-ups. Since the time-honored conceit of superhero team-up stories involves the stalwart souls initially duking it out with each other out of some sort of confusion, Byrne often had to contrive a way for Superman to be out of sorts, since none of his fictional compatriots were likely to mistake him, even briefly, for a foe. In the case of his encounter with the Teen Titans, Superman had swapped psyches with a far frailer man who swung wildly in his new buff form.

Byrne also took a special pleasure in putting his own fandom of legendary comic book creator Jack Kirby on the page, using his vaunted predecessor’s characters as much as possible, including an early jaunt into the realm of the Fourth World. It would soon get a little weird, but initially it was simply cool to be Superman getting into big old brawls with figures tough enough to take one of his punches. 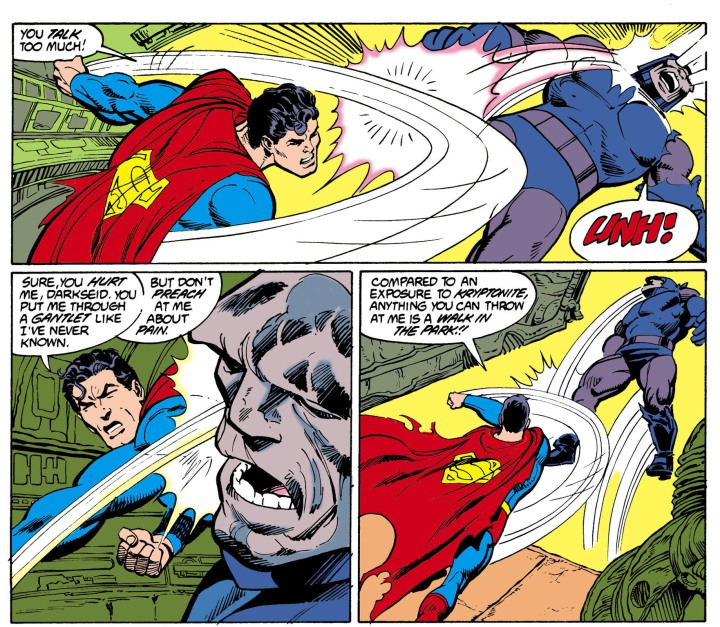 And then there were those figures that I had vague notions about — developed from a distance — that Byrne made concrete. In the DC universe, which emphasized the universe part, that meant characters such as Hawkman and Hawkgirl. 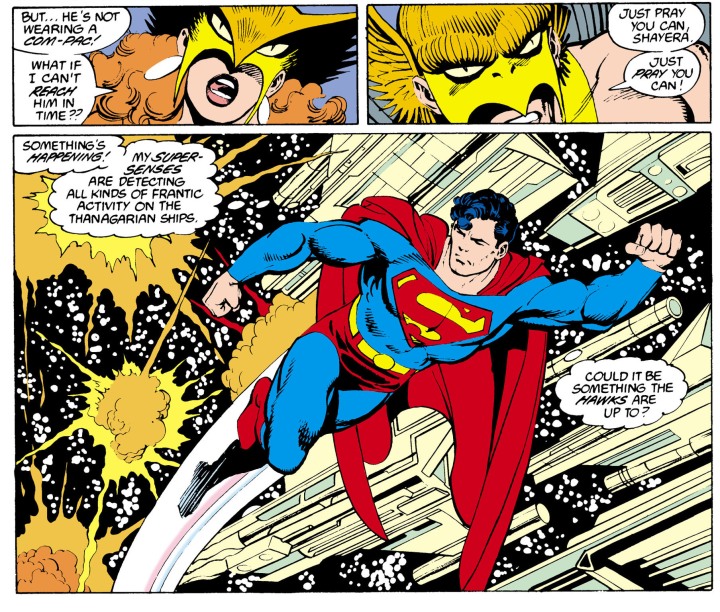 Much as Byrne obviously enjoyed the latitude Superman’s vast power provided for adventures across the cosmos, I found myself most drawn to the comparatively smaller scale stories that incorporated some of the odder residents of the wide, wild DC narrative. My conception of the publisher that predated Marvel was that all of their characters were fairly stodgy, an understandable yet reductive viewpoint given that the most famous figures carried a weighty legacy. The characters I knew, that everybody knew — Superman, Batman, Wonder Woman — were true icons, stuck with a stultifying veneration as a natural side effect of the history they carried. Byrne sidestepped that by focusing on the funkier, more playful characters, including the Metal Men, genial robots with an astounding pliability suited for a medium with conceptual boundaries that extended as far as the imagination could reach.

There’s a whole dissertation that can be written about how Byrne brought Marvel storytelling techniques to DC at a time when the publisher couldn’t really accommodate them. For this reader, though, he provided a passageway to a whole new booming population of colorful characters at precisely the point when my comic reading horizons were ready to expand. I was ready for more, and Byrne’s Action Comics provided it.

2 thoughts on “My Misspent Youth — Action Comics by John Byrne”