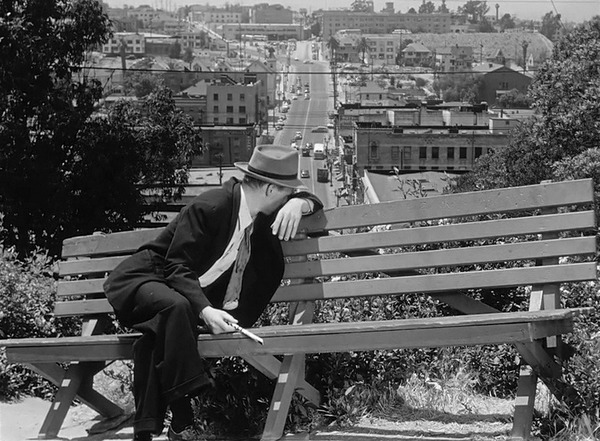 M (Joseph Losey, 1951). Twenty years after the Fritz Lang film of the same name became a breakthrough for actor Peter Lorre, Hollywood took its crack at the very sordid tale of a child murdered hunted by both the police and the local criminal syndicate. David Wayne plays the compulsive killer with a fraught intensity aligned with the psychological theories of the day, when murderous impulses were often treated dramatically as a sort of migraine-induced fever dream. Director Joseph Losey gives the film a proper sordid feel, emphasizing the grit of the city and the muscular jockeying of the men who operate in it, on both sides of the law. A methodical approach to the storytelling works well, at least until the denouement, which feels drawn out as Wayne’s performance slips fully from measured intensity to the brink of floridness.

Halloween (David Gordon Green, 2018). Representing the eleventh Halloween film, and at least the third attempt at significant relaunch erasing much of what precedes it, this horror film positions itself narratively as the sole follow-up to John Carpenter’s 1978 classic. The murderous Michael Meyers (James Jude Courtney, with Frank Castle, the originator of the role, pitching in) has been incarcerated for the whole of the four decades since he weaved through trick-or-treaters to terrorize the town of Haddonfield. And the most famous survivor of his killing spree, Laurie Strode (Jamie Lee Curtis), has been living in self-imposed isolation like a doomsday prepper, though her version of the end of the world wears a largely featureless mask. On an ill-timed and ill-fated transfer of patients from one sanitarium to another sets Michael loose on the anniversary of his last bloody romp. Fangoria-approved carnage follows. The film is directed by David Gordon Green, whose directorial career has been all over the place since his poetic debut, George Washington. He proves adept at mood-setting and is even more impressive at using smart, jolting edits to heighten the tension. As enjoyable as it is to see Curtis offer her own version of Linda Hamilton’s radical Terminator 2 transformation, the story is a little too thin. It hits all the expected beats without much reinvention, which means it inevitably gets dull. One of the strongest compliments I can pay the film in this era of endless recycling is to note the fan service is thankfully kept to a minimum (and what’s there is, admittedly, clever and entertaining).

Jane Fonda in Five Acts (Susan Lacy, 2018). There are few Hollywood lives more deserving of a feature-length documentary than momentous, contradiction-laden journey of Jane Seymour Fonda. Director Susan Lacy has direct access to the star and a few of her close compatriots, but avoids letting the film descend into hagiography, even as her sympathies for Fonda as a survivor are very clear. Fonda’s most controversial actions as an activist in opposition to the Vietnam War are addressed directly and in depth, as is the familial pain she endured and caused. But her astounding acting talent and focused intelligence are also given their due. And then the film offers a reminder of the true blockbuster levels reached by Fonda’s workout products. To say Fonda contains multitudes is like gazing out on the Pacific and saying, “Well, there’s probably a drop or two in there.” Lacy uses her windfall of archival footage and photography well. If there’s a shortcoming to her approach, it’s a lack of proper astonishment at the condensed timeframe of some of Fonda’s most impressive achievements. From 1978 to 1981, she developed and starred in Coming Home, The China Syndrome, 9 to 5, and On Golden Pond, with a couple other starring roles mixed in. And Jane Fonda’s Workout Book was published in that span, too. That’s a career’s worth of highlights within a bushel of months. It’s remarkable.