When I started collecting Marvel Comics at the dawn of the nineteen-eighties, there were a few issues from before my time that were highly coveted by me. Many of them represented revered, foundation runs (such as lengthy stretch of Fantastic Four by creators Stan Lee and Jack Kirby, or the transformative work on X-Men by Chris Claremont and John Byrne), but there were also a few stray issues that I longed to possess simply because they were so blatantly ridiculous.

Particularly in the nineteen-seventies, the publisher had a strong tendency to weave major pop culture trends into its stories. If use of CB radios approached the level of craze, then Marvel was sure to concoct a new character with a connection to and affinity for CB radios, or a new foe might ply his nefarious trade in a disco. On rarer occasions, a figure or figures could become so prominently favored by the expected audience of Marvel that the real-life figures were hauled basically intact into the fictional world of superhuman, costumed do-gooders. It was this strategy which led Peter Parker to take his favorite date, Mary Jane Watson, over to 30 Rockefeller Center to sit in the audience for an episode of Saturday Night Live. It was not a little blip on the fringes of a real adventure, either. The cover of Marvel Team-Up #74 laid it out plainly: Spider-Man was joining forces with the Not-Ready-For-Prime-Time-Players.

Written by Chris Claremont and penciled by Bob Hall, the story swipes a plot point from the Beatles film Help! Like Ringo Starr in the earlier movie, John Belushi receives a mysterious ring in the mail, shoves it onto his finger, and then can’t remove it.

The special piece of jewelry was sent to Belushi by mistake. It was supposed to come into the possession of Silver Samurai, a Japanese behemoth who handily chose one of the most familiar signifiers of his homeland for the theme of his villainous identity. From his perch in the audience, Peter spots Silver Samurai’s henchman taking out crew members in the backstage area, leading him to realize trouble is afoot. During the opening monologue, delivered by that week’s host (Stan “The Man” Lee, natch), Peter dons his guise as Spider-Man and proceeds to investigate. 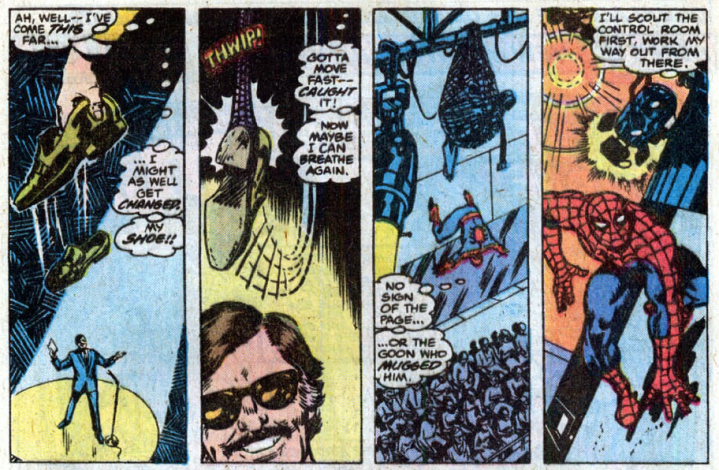 Spider-Man weaves in and out of other backstage shenanigans, as the show gradually falls apart while the multiple conflicts stirred up by Silver Samurai’s efforts to retrieve the ring sends the costumed troupe members dropping through trap doors while others offer impromptu entertainment to keep the audience distracted from the mayhem behind the scenes. At one point, Garrett Morris has to fight off a crew of Silver Samurai’s flunkies while he’s dressed as the mighty Thor for a sketch.

The whole story builds to the inevitable moment when Belushi, in the garb of the recurring samurai character he played on the show, goes one-on-one with his chrome-adorned, nefarious counterpart. 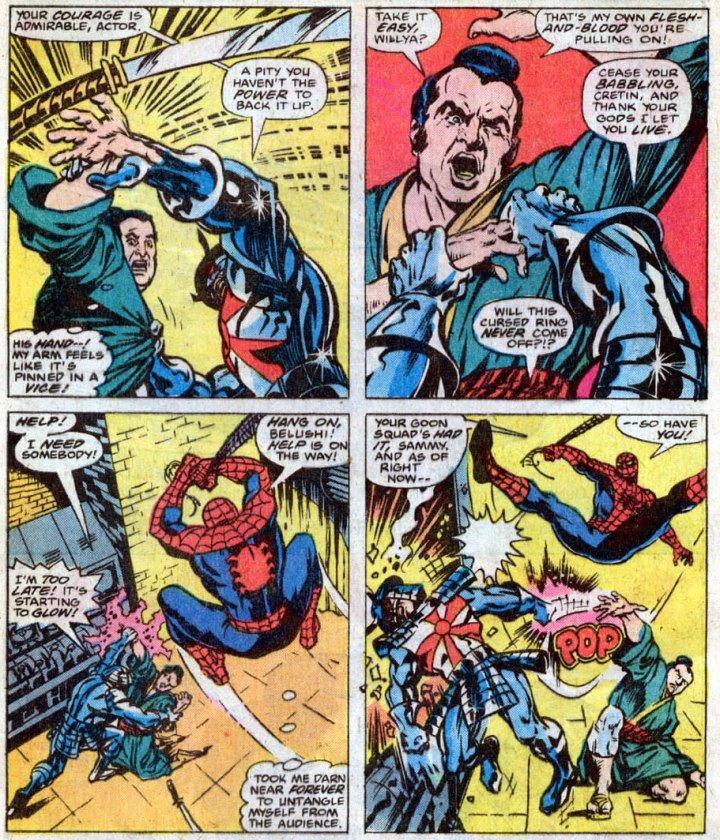 When I finally laid my happy eyes on this issue, it was everything I wanted it to be. Much as I valued the socially serious inclinations of Marvel storytelling, I maintained a weakness for pure goofiness from my time with more cartoonish fare. And I was a burgeoning comedy nerd, so the inclusion of the early iteration of the Saturday Night Live cast (technically not the original cast, because the issue came out comfortably after the point Bill Murray replaced Chevy Chase) cheered me further. I wanted my comics grounded in strict continuity (that’s a big part of why I favored Marvel over their distinguished competition), but I instinctively recognized the value in occasionally stepping outside of what was canonical to follow a loopy idea to all its illogical conclusions.