Outside circumstances mandated a new approach for Neil Young when he recorded the album Re·ac·tor. His infant son Ben, his first child with his second wife, had recently been diagnosed with severe cerebral palsy, and the family was devoted almost full-time to working through a program to aid the boy’s development. Young, who’d previously kept nocturnal hours more typical of rock stars, limited himself to recording sessions in the afternoon, usually spending no more than four hours in the booth before getting back to Ben.

Understandably, the material on Re·ac·tor often feels like an early pass that was settled on rather than explored, an impression largely backed up by the reminiscences of those involved. The goofy “T-Bone” is representative. A last-minute, studio-concocted addition, the tracks is over nine minutes of aimless garage rock jamming as Young repeats “Got mashed potatoes” and “Ain’t got no T-Bone,” at last partially as a tribute to the restaurant where he met his wife Pegi. It’s a creative starting point presented as a finished product.

For other artists, this sort of loose approach can work, resulting in an endearingly freewheeling album. But playful is an overly incongruous vibe for Young. His gentle gags come across as grouchy old man complaints (and he was still in his thirties at this point). “Motor City” is a cranky rant set to music (“Another thing that’s bugging me/ Is this commercial on TV/ Says that Detroit can’t make good cars any more”), like Andy Rooney with an amplifier. And “Opera Star” is just bizarre, as if it were accidentally released with placeholder lyrics (“You were born to rock/ You’ll never be an opera star”). Young and his co-producers layer the songs with all sort of fussy elements —  sounds of simulated gunfire on “Shots,” a chugga-chugga beat on train song “Southern Pacific” — that only detract from the music’s impact.

Re·ac·tor didn’t fare well on the charts, helping to sour Young’s relationship with his longtime label, Warner Bros. subsidiary Reprise Records. Young also opted not to tour in support of the records and similarly declined most interviews and other promotional efforts. Tending to the added challenges faced by his son was good cause for Young’s retreat from the machinery of the music business, but the label bosses were kept in the dark about Ben’s condition. To them, Young was just being pointlessly difficult (a conclusion which, to be fair to the executives, was made with the corroborating evidence of Young’s previous professional mood swings). After Re·ac·tor, Young and Reprise parted ways, and the performer jumped to Geffen Records, where he spent a good chunk of the nineteen-eighties in a state of constant reinvention.

Beat Crazy, the third album from Joe Jackson, includes an anguished explanation on its inner sleeve: “This album represents a desperate attempt to make some sense of Rock and Roll. Deep in our hearts, we knew it was doomed to failure. The question remains: Why did we try?”

Officially billed as a release by the Joe Jackson Band, Beat Crazy opens with a title cut that hands lead vocal duties to bassist Graham Maby, as if trying to assert a group effort ethos. Part Peter Gunn theme song and part rocksteady, the track is a sleek inversion of the jolting pop sound of Jackson’s first two records. It sets the standard for the rest of the album being simultaneously adventurous and tightly controlled. Sometimes coming unmoored is just the first step to sailing the high seas.

One of the key ways Jackson elevates the material is through the comic specificity of his lyrical observation, as with his griping about a partner whose too busy to spend time with him on “One to One” (“You’re going somewhere everyday/ Vegetarians Against the Klan/ Every Woman Against Every Man”) or the splendid mood-setting on the jittery “Evil Eye” (“I got the candles burning low/ I got the Cramps on the stereo”). Jackson’s pointedness is arguably at its best on the pointed album closer “Fit,” a snarled rallying cry for outcasts that’s admirably ahead of its time (“Don’t laugh, but there are people in this world/ Born as boys and fighting to be girls/ People standing in their way/ Some are straight and some are gay”). Not everything holds up — “Battleground” is now unbearable in its casual and repeated use of a word now wisely unuttered outside of rap songs — but the clarity of Jackson’s perspective gives Beat Crazy a spine.

Officially positioning Beat Crazy as an outing for a band rather than a solo project is a nice act of largesse, but it doesn’t properly reflect the authorship. Jackson wrote and arranged all the songs, and he also served as the sole producer for the first time. And not long after the album’s release, the Joe Jackson Band guises was dropped altogether. Guitarist Gary Sandford and drummer David Houghton, who’d been on all three of Jackson’s album to that point, were out of the group, and Jackson was off to explore other creative angles, not always successfully. 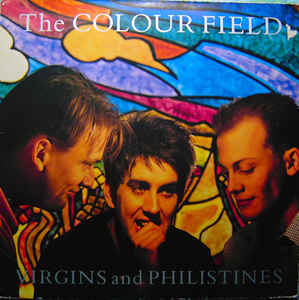 Terry Hall was on his third band of major prominence upon the release of Virgins and Philistines, the debut album by the Colour Field (who would eventually excise the space from their name in favor of a tidy compound word). He fronted the Specials and then released two albums with the offshoot band Fun Boy Three. After the latter group split up, Hall decided to strike out in a different direction, recruiting bassist Karl Shale and guitarist and keyboardist Toby Lyons from the obscure ska band the Swinging Cats. Although the members of the trio shared a history with bouncy, reggae-influenced beats, the Colour Field skewed in the direction of glossy, precise pop, in the vein of Aztec Camera and the Housemartins.

Clean and pretty, the Colour Field sound was somewhat out of step with U.S. tastes at the time, so Chrysalis Records rejiggered the track listing of Virgins and Philistines, putting a faithful, airy cover of the ? and the Mysterians hit “I Can’t Get Enough of You Baby” right up front. The flip of the record included a cover “Hammond Song,” a more obscure song that was originally recorded by the Roches, providing a couple tested tunes to go with the Colour Field originals.

Distant as it may be from U.S. commercial radio preferences, then and now, the material on Virgins and Philistines is very strong. The quietly epic “Pushing Up the Daisies” and the sly, elegant “Yours Sincerely” are gliding beauties, and the polished pop song “Thinking of You” was justly a solid hit in the U.K. Upping the studio sheen yet further, “Castles in the Air” is a precursor to the Divine Comedy and other acts that would make masterful chamber pop in the decade to come. “Cruel Circus” plies the sweet pop to an angry statement in favor of animal rights that give Morrissey’s vegan swoons the taste of flat soda (“Fur coats on ugly people/ Expensively dressed up to kill/ In a sport that’s legal/ Within the minds of the mentally ill”).

In keeping with Hall’s history, the Colour Field didn’t last long. There was only one more full-length album — Deception, released in 1987 — before the group was disbanded, and Hall went onto a journeyman career through U.K. music.

Getting a tantalizing taste of commercial success, Modern English were eager to make a hit. The 1982 single “I Melt with You” now stands as one of the quintessential songs of the nineteen-eighties, but it was only a modest success at the time of its release, peaking at #78 on the Billboard chart (nestled between U2’s “New Year’s Day” at #77 and Ultravox’s “Reap the Wild Wind,” at #79, giving that sliver of the Hot 100 a very college radio feel). Modern English weren’t able to leverage the still-growing appreciation of the single into attention for the follow-up releases, so they decided to make an all-in attempt at appealing to the masses with the album Stop Start, abandoning the artier inclinations of their original label 4AD to give themselves over fully to Warner Bros. subsidiary Sire Records.

Every groove of Stop Start holds evidence of a band trying way too hard. “The Border” is horrid in its ornate overproduction and the single “Ink and Paper,” co-written by former Rubinoos guitarist Tommy Dunbar, is painfully generic. As Modern English flails around in search of a crowd-pleaser, they sound like any number of bands that sold their souls to the devils of rapidly advancing studio technology. “I Don’t Know the Answer” is like Glass Tiger hopped up on amphetamines, and “Love Forever” echos Simple Minds as they succumbed to the allure of too much studio time in their desperate, futile attempt to prove they didn’t need a soundtrack hand-me-down to top the chart. The shiny flopsweat gleams ever brighter until the album closing “Start Stop Stop Start” is essentially nothing but studio effects.

Stop Start wasn’t a hit, and Sire effectively gave up on the album after the first single flopped. The frustration of it all broke Modern English. They disbanded shortly after the album’s release, though that professional choice also didn’t take. The group reformed a couple years later, as hungry for a hit as ever, releasing the comeback album Pillow Lips. That album’s first single? A rerecorded version of “I Melt with You.”