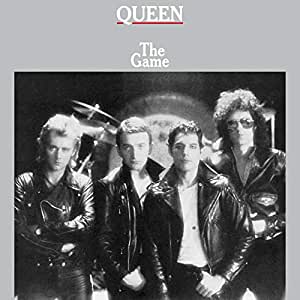 Producer Reinhold Mack told Queen it was time to use a musical tool they’d resisted to that point. Across seven prior studio albums, the flashy, British rock band made bigger and bigger sounds, always noting they did so without disposing themselves of the some of the emerging technology that made creating overlapping tones easier. Queen was arguably ready to employ the instrument anyway (surely it must have been strange for them to watch from the sidelines the explosion of disco music, which shared a lot of DNA with their hook-laden, theatrical rock), but Mack was the collaborator who helped smack away the last of the resistance. The resulting LP, The Game, became the band’s biggest-selling studio album in the U.S. and yielded two chart-topping singles: “Crazy Little Thing Called Love” and “Another One Bites the Dust.”

The chewy hit singles aside, The Game is a messy endeavor, finding Queen bopping back and forth between middling ideas that seem barely coaxed to completion. The lushly overdone album opener “Play the Game” is so squarely in Queen’s bailiwick that it’s hard to criticize it. On the other hand, the maudlin, florid divorce song “Save Me” reasonably invites scorn, and “Need Your Loving Tonight” shows the reasonable belief that singer Freddie Mercury could make just about any words work doesn’t mean it’s forgivable to infest the world with lyrics such as “Come on baby let’s get together/ I’ll love you, baby, I’ll love you forever.” The absolute nadir, though — and I’d argue of the very worst rock songs of all time — is the well-meaning but disastrous “Don’t Try Suicide,” on which Queen sounds like a delusional jazz combo giving this nutty rock ‘n’ roll thing a try while Mercury croons out brutal inanities (“Don’t try suicide/ You’re just gonna hate it/ Don’t try suicide/ Nobody gives a damn”).

Although The Game represented a major success for Queen, the band was largely unable to capitalize on it moving forward, at least in the U.S. Around six months after the album’s release, new Queen music arrived in the form of the soundtrack to the garish bomb Flash Gordon. A few more modest hits followed, but Queen’s slide from vital rock band to warmly tolerated legacy act was underway following The Game.

Musicians United for Safe Energy, known as MUSE, formed in the late nineteen-seventies when a group of lefty musicians — namely Jackson Browne, Graham Nash, Bonnie Raitt, and John Hall — joined with activist Harvey Wasserman following the partial meltdown at Pennsylvania’s Three Mile Island nuclear power plant. Not long after the group formed their pact, they announced a series of benefit concerts, with proceeds largely going to organizations that funded efforts around the growth of the solar power industry. The shows were captured for a concert film and a three-record set.

As if often the case with such altruistic ventures, the motivating sentiment is more laudable than the finished product. In the case of the No Nukes album set, the Doobie Brothers infestation that spread across the multiple sides is certainly a main culprit when it comes to the album’s almost intolerable soft rock inner being. It’s bad enough that the album’s grand finale closer is a big hollow jam on “Takin’ It to the Streets,” but the group crops up elsewhere, decisively demonstrating their ability to laden any song with burdensome uncoolness. I don’t know that I would have previously gone out of my way to tout Nicolette Larson’s hit with the Neil Young-penned “Lotta Love,” but the Doobies slathering their tepidness all her live version here sure makes the case the original. Nor everything can be be laid at their feet, though. It’s not their overly mellow backing of John Hall’s Hall “Power” that creates the painfully didactic lyrics (“Won’t you do this for me?/ Take all your atomic, poison power away”).

There are reasonably appealing tracks to be found on No Nukes, including the stark cool and pointed fury of Gil Scott-Heron’s “We Almost Lost Detroit” and Tom Petty & the Heartbreakers slowing, surely grinding through a cover of Solomon Burke’s “Cry to Me.” There’s little doubt that the main appeal of the album was the presence of Bruce Springsteen and the E Street Band, the first officially release live recording by the outfit that already had a reputation as unparalleled stage performers. The album includes the “Detroit Medley” that had been a staple of the Boss’s live shows for a few years by that point, as well as the whole group pitching in on Jackson Browne’s rendering of “Stay,” and song he’d taken into the Top 40 a couple years earlier.

Springsteen’s reticence for issuing live music faded a few years earlier, beginning with a chart-topping box set in the mid–nineteen-eighties and extending across a slew of official releases. One of the most recent was in fact a complete set of songs from the No Nukes shows.

Lone Justice arrived with a big batch of burgeoning rock legend stories. A surging presence on the Los Angeles scene, the group so commanded the room when they opened for Love singer Arthur Lee, in the midst of mounting an attempted comeback, that Lee reportedly walked off the stage after a couple songs. Dolly Parton extolled Lone Justice’s lead singer, Maria McKee, and Linda Ronstadt personally intervened to help get the band signed to Geffen Records. With Jimmy Iovine onboard to produce the band’s debut, anticipation was high. While it didn’t exactly turn into an unstoppable hit, Lone Justice more than delivers in quality. There’s little doubt as to why those many admirers were effusive in their praise.

The album — and, in a way, the band — explodes into being with “East of Eden,” a firm, forceful rocker with a hand-jive rhythm. Lone Justice’s heavy country music influence shows up all over the record, in the heartbreak twang of “Don’t Toss Us Away,” the hoedown charge of “Working Late,” and the steady thump of “Soap, Soup and Salvation,” a showstopper worth of the Opry. Unlike some other rock acts that look to songs of the South, Lone Justice never seems to be dabbling, swiping authenticity from a genre known for beer watered down by tears. Through a lovely alchemy, the Angelenos make the hybrid genre playfulness deeply authentic.

Inevitably, the album is most memorable as a showcase for McKee. The band is strong; McKee is a powerhouse. Her tuneful shout fully enlivens “Ways to Be Wicked,” a track co-written by Tom Petty and Mike Campbell, taking the the intoxicating rebellion and confident seduction that was long the most compelling undercurrents of rock ‘n’ roll and channel and channeling it all into her vocals, making a for a practically perfect three and a half minutes. “Sweet, Sweet Baby (I’m Falling)” is similarly dizzying in its effectiveness, the kind of song that makes a hundred bar bands give up because they’ll never touch its ease in capturing and conveying the lifeblood of tried-and-true rock music.

By some assessments, the enormous amount of hype surrounding Lone Justice (which also included a spot as opening act on U2’s tour in support of The Unforgettable Fire tour) created an almost impossible situation. When they didn’t charge to the top of the charts, it was considered a devastating disappoint. Before working on a second album, there were major personnel shifts and some rethinking of their sound. Their next album would bear similarities, but it was really made by a different band with different goals.

Green on Red made their major label debut with the EP No Free Lunch, and a few months later it was time to take a bigger, bolder step forward. Gas Food Lodging takes the tilt toward country rock of the prior release and turns it into a whirligig of happy invention. Album opener “That’s What Dreams” is rock with a fine twang and grandly forlorn lyrics (“It seems no one has any faith any more” is the opening line, and it doesn’t get all that much cheerier from there). While clinging to their well-established bona fides earned amongst the retro-rockers of Los Angeles’s Paisley Underground scene, Green on Red advances a sound that owes a lot of the earnestness of the heartland.

They also play with the rigor of an act that’s put in their time in beer-soaked venues. The fine “Black River” even offers the lonely lament of a gigging musician (“Every morning, I drive the same old car/ And every night I play a different bar / Jackson, Mississippi, now it’s San Antone / Memories fade through hazy days”). Over and over again, Green on Red proves they have the flinty fury to rouse any crowd, whether with the crunchy guitar riffs of “Fading Away” or the bold and bluesy “16 Ways.” Both mirroring the tough-minded rock of the Meat Puppets and anticipating the languid guitar workouts of Built to Spill, “Sea of Cortez” is fantastically sludgy, the kind of track that invites the listener to get lost in it. Gas Food Lodging is plainly formidable.