The band Icehouse introduced themselves to the world with the song “Icehouse” off of the album Icehouse. The heavily self-referential methodology wasn’t intention or even in place at first. Hailing from Australia, the band started in 1977 under the name Flowers, and that moniker was still in place when the album was initially released, on the independent label Regular Records. When the album performed well in their homeland, the band was pursued by major labels, finally signing with Chrysalis Records. The old band wouldn’t do, though, because there was already a Scottish post-punk outfit known as the Flowers. As if grabbing the first thing handy, the Australian group became known as Icehouse.

On their debut album, Icehouse is laying pavers to get from the prog rock of the nineteen-seventies to the synth pop of the nineteen-eighties. “Sister” applying its agitated keyboard parts to what otherwise sounds like one of the weird concept album sci fi sagas perpetrated by the likes of Jefferson Starship (“There’s something you ought to know/ About the latest model/ She’s not the usual kind/ She’s made of mindless metal/ She’s not exactly normal”), and “Sons” is similarly awash in a sense of profound drama. On “Fatman,” Icehouse sounds like a more burbly version of Boomtown Rats, and “Not My Kind” is like INXS aping David Bowie. None of the material is all that strong, but it’s all interesting around the edges.

Boosted by heavy touring, Icehouse made a little bit of headway on the charts in the U.S., earning some admiring airplay on album rock radio stations. And band leader Iva Davies started pulling away from his mates. When it came time to get down to work on the important sophomore release, Davies essentially treated it as a solo project, setting the rough creative approach for Icehouse from then on.

If there was one thing UB40 was better at than any other band, it was recycling. The band’s biggest hit, a version of Neil Diamond’s “Red Red Wine,” first appeared on and was released a single from the 1983 album Labour of Love, which was comprised entirely of cover songs. It’s made the U.S. Top 40 upon its initial release, but become a chart-topping phenom some five years later, after it was rereleased after UB40 performed it a concert paying tribute to Nelson Mandela. The more telling example of their capacity to reuse material is the 1985 album Baggariddim, which featured reworking of songs that appeared on their previous two albums, and which is turn was stripped down for U.S. release to the EP Little Baggariddim.

The main attraction on the EP is a pass at the Sonny and Cher pop classic “I Got You Babe,” with UB40 frontman Ali Campbell trading lyrics with Chrissie Hynde. The track was a result of an impromptu get-together between UB40 and the Pretenders in Minneapolis, a reunion years after the former band got a major career boost when the latter, already well established, offered a spot as an opening act. After the barroom singalong set list got around to “I Got You Babe,” everyone assembled decided it was a good idea to record it. Released as a single, the cheery, sweetly sentimental cut topped the chart in the U.K. and made it into the Top 40 in the U.S.

The rest of the EP is fairly thin. The “One in Ten,” about unemployment in the U.K., and “Don’t Break My Heart” are passable but slack. “Hip Hop Lyrical Robot,” which finds Pato Banton pitching in, is about as dopey as the title suggests (“Can you dig it, all right I can dig it/ ‘Cause I’m your hip hop lyrical robot and a real cool cat”). Whether its viewed as a meaty single or a abridged version of a proper UB40 album, Little Baggariddim is passable at best.

The fourth album from Mojo Nixon & Skid Roper briefly threatened to bring the rock duo into the mainstream, all because of a declaration of the omnipresence of Elvis Aron Presley. “Elvis is Everywhere” is undoubtedly the Platonic ideal of a Mojo Nixon song, extolling the coolness of a pop culture icon with a hillbilly enthusiasm and a rascally sense of humor. Elvis has taken over the Bermuda Triangle, Nixon explains, elaborating that “Elvis needs boats!”

With Nixon’s guitar and Roper’s washboard getting proper workouts, they run through a characteristic assortment of roughshod commentary on the indignities of the age. Taking aim at the emerging trend of workplaces demanding drug tests, Nixon declares “I Ain’t Gonna Piss in No Jar,” directing specific ire at the first lady who woodenly advised citizens to simply decline offers of drugs (“Well I ain’t gonna pee pee in no cup/ Unless Nancy Reagan’s gonna drink it up”). Nixon pines for the bygone glories of American blues music on the rip-roaring “I’m Gonna Dig Up Howlin’ Wolf” and cedes lead vocal duties to Roper on the spoof-adjacent but joyful “Polka Polka.” “Wash No Dishes No More” starts with a minor grievance before escalating to defiance against lawyers, taxes, and government-issues IDs, among others.

The album shows some signs that Nixon is starting to repeat himself, suggesting his well of ideas only went so deep. Even so, Nixon was still really clicking at this point. Without a doubt, Bo-Day-Shus!!! lives up to its name. 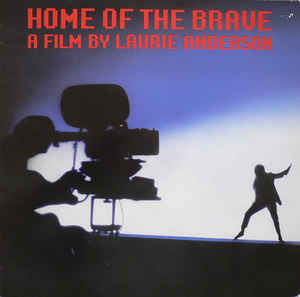 When Laurie Anderson revisited her concert film Home of the Brave around thirty years after its initial release, she was reasonably pleased with what she found there. But, like any of us with a few extra miles on the odometer, nothing was more jarring than being reminder of bygone energy levels.

“I couldn’t believe I was jumping around like that,” observed Anderson. “I hadn’t remembered how incredibly enthusiastic I was.”

Home of Brave was put together from Anderson’s live performance at the Union City, New Jersey venue Park Theater. The accompanying soundtrack album included some of the same live versions, supplemented with fresh studio recordings. No matter the specific derivation of the individual cuts, the whole album serves as a valuable document of the brilliant, iconoclastic artist at that moment. The slinky, bright “Smoke Rings” and the artful oddity of “Late Show” quickly establish the appealing uniqueness of Anderson’s creative voice, with so many intricate layers that it’s like pop music masquerading as fine art. Or maybe it’s the other way around.

“Talk Normal” includes a spectacular swirl of elements, and “Sharkey’s Night” takes the song’s funk deconstructions several steps further than the album version. “Language is a Virus” demonstrates how much personality brings to songs with her vocals, creating a whole landscape of character with nuances in tone. The album ends with “Credit Racket,” which is exactly that. It’s a mess of sounds that’s like a game show theme from a different planet. No mere throwaway, the cut is odd and wonderful. Nobody makes a racket like Anderson.