I don’t think I can convey how jarring it was when I first opened my copy of The New Mutants #18. It was the mid–nineteen-eighties, so I was excitedly devouring every last comic book that had a connection to the X-Men. Just about every devoted reader of Marvel Comics was doing the same, I’m sure, especially because it was a reasonably manageable endeavor, with only only a handful of ancillary options. The New Mutants was the most vital spin-off, because the super-powered teams that populated the title were, like the X-Men, residents of Xavier’s School for Gifted Youngsters, and Uncanny X-Men scribe Chris Claremont handled the same duties on the book.

Bob McLeod was the first artist on the series, and he was followed by Sal Buscema. Both were sturdy pencillers, rendering characters in the well-established Mighty Marvel Manner that had a clear debt to founding father Jack Kirby but was a clearer continuation of intermediary art heroes such as John Romita and John Buscema, who brought a tang of personality while keeping the characters firmly on model. The art was nice, sometimes lapsing into serviceable. It was never the most memorable part of any given issue. Then came Bill Sienkiewicz.

Sienkiewicz was no wild, untamed newcomer plucked from an outsider artist colony to deliberately rattle sensibilities. He’d been part of the Marvel stable for years, and I’d read plenty of comics with his handiwork, including the entirety of his run on Fantastic Four, which were truly foundational for me. Those previous outings, though, largely held to house style. For The New Mutants, Sienkiewicz cut loose. His style was impressionistic, forgoing plain, direct visual storytelling for impactful explosions of distorted forms. It was an explosion of strategically unsettled imagery, even in the most mundane moments. A simple conversation in a hospital waiting room, for example, is presented in a cacophony of angry linework.

And when the story called for visuals that dipped into the realm of horror, Sienkiewicz used the newfound freedom he felt to sandblast the page with shock.

Claremont understood the possibilities he had with his new collaborator, and he immediately adjusted his writing to suit Sienkiewicz. That doesn’t mean Claremont cut down on his word count to better showcase the art. He remained as verbose as ever. But plots were unmistakably developed to exploit Sienkiewicz rampaging creativity, beginning with the very first story arc that pitted the youthful heroes against a rampaging demon bear.

Claremont also introduced Warlock, a space alien constituted of undulated techno-organic material who defied the laws of physics with every move he made. Warlock was basically conceived to be a character only Sienkiewicz could draw correctly. 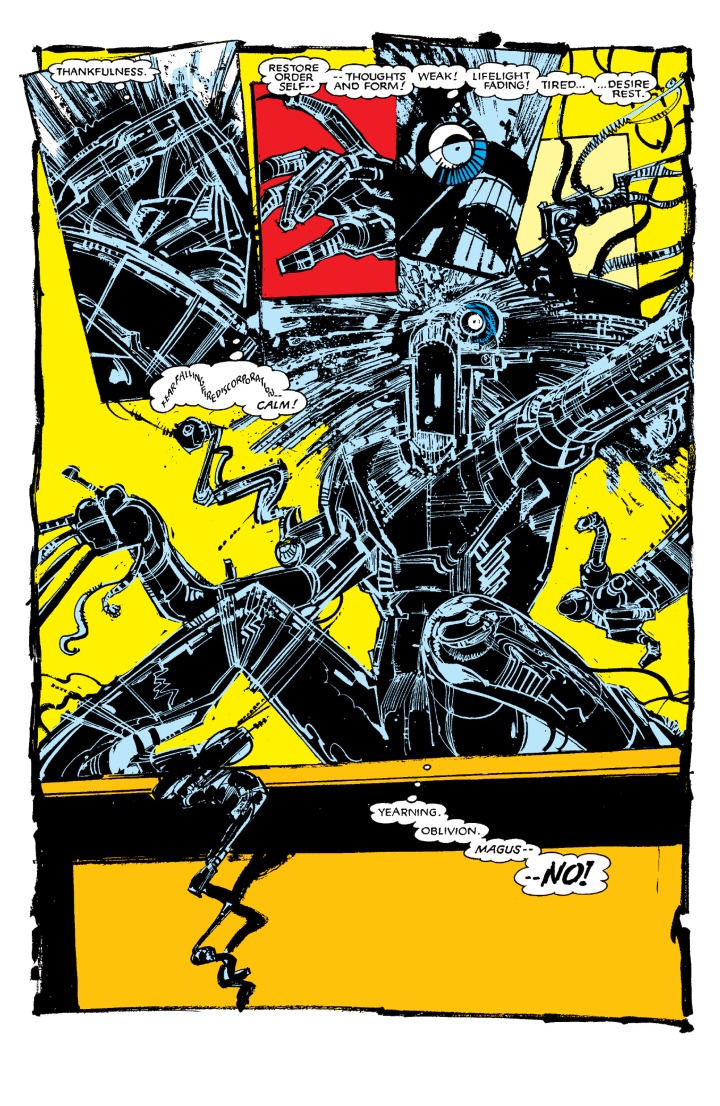 In the current comic book climate, artists and writers are regularly given free rein to depict the characters any which way they like, often to the contradiction of shared-universe titles published at the same time. When Sienkiewicz took over the art on The New Mutants, though, his bold choices were downright revolutionary. I can attest with certainty that, for at least one young reader, Sienkiewicz expanded the very perception of what comics — even simple superhero comics — could do.