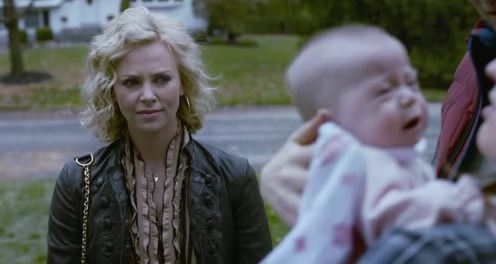 Young Adult reunites director Jason Reitman and screenwriter Diablo Cody four years after their shared breakthrough with Juno. In different ways, to different degrees, both creators come into the movie with a little something to prove. Despite an even better follow-up film, Reitman still has his vocal detractors, those who find his efforts a little too slick and glib. Cody, though an enthusiastic Oscar winner for her Juno efforts, faced an even sterner backlash, largely on the basis of another produced screenplay that was smothered into lifelessness by the same sort of dialogue of inventive slang that gained her attention in the first place and a Showtime television series that launched with a similar affliction. I understand it got better.

For her part, Cody proves that she may have more staying power than previously expected. Young Adult ironically demonstrates great new maturity in its depiction of a woman stalled in the grinding selfishness of mean-spirited adolescence. Charlize Theron plays Mavis Gary, ghostwriter of a batch of young adult novels about privileged, hostile prep school girls. When she feels herself approaching a new low point as the book series reaches its final installment, she fixates on an old high school beau, returning to her modest Minnesota hometown to swipe him away from his wife and new baby daughter. Mavis is depicted as rotten to the core, scathing in her disdain and ready to discard anyone who doesn’t admire her cunning or otherwise buffer her confidence. Theron is bracingly funny and bravely lacking in vanity in her performance. This is a hateful woman she’s portraying and she feels no need to offer hints of some hidden heart of gold.

In fact, the whole movie is fairly gutsy. The usual trajectory of this sort of story involves some amount of learning that leads to epiphanies and redemption. With his deadpan styling, Reitman hints early on that he’s not necessarily interested in making sure the audience ever feels good about his protagonist. The film is cutting and honest. If it occasionally grows a little slack too–it’s a pretty slender plot, after all–there’s at least the promise of an enduring dark sensibility to keep it from growing too wan and soft. Reitman doesn’t carry it through to the end as effectively as he could, taking an ending that should be pointed and making it just a shade too muddled. I suspect a decent number of audiences will misread it entirely, and, in this instance, their confusion will be understandable. Young Adult is a strong movie, but, like its main character, it sometimes gets a little too lost in itself.