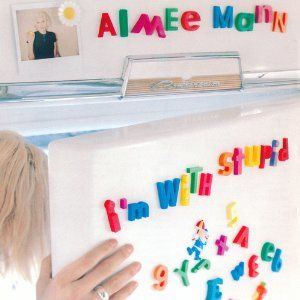 Aimee Man is perhaps the quintessential example of the perils of the sort of pop stardom MTV delivered in the mid-eighties. Her band ‘Til Tuesday had a true smash with their first proper single, “Voices Carry,” (following a big, local hit in their hometown of Boston with a a song that proved to later be something of a dud when released nationwide) but it so completely defined them that it obscured Mann’s skill as a songwriter, something should have been evident to anyone paying attention. After ‘Til Tuesday’s final album, released in 1988, it took five years before she released her first solo album, Whatever. Mann was on Geffen Records, and it quickly became evident that the label had no real idea how to promote her music. That reportedly led to the title of her sophomore effort, I’m with Stupid, which was her last on Geffen, but also yielded her only her only solo single to cross into the Billboard Hot 100, albeit just barely with a feeble peak of #93. Regardless, her music earned at least one key fan in director Paul Thomas Anderson, who made Mann’s songs the lifeblood of his sprawling 1999 dazzler, Magnolia. Mann may have been hobbled a bit by her early cable network exposure (or arguably overexposure), but it also seemingly taught her the value of broad-based self promotion, which kept her popping up on cool television programs as she kept delivering new albums on a regular basis over the years.

XTORT still stands as the most commercially successful album from the German industrial rock band KMFDM. That hardly means it was a blockbuster–it is still German industrial, hardly an easy sell at any time. XTORT was the band’s ninth studio album overall, and their first without original drummer En Esch. That probably wasn’t the devastating of an issue, since the band was already used to a rotating line-up by that point in time. There was undoubtedly more of an emotional pall cast by the death of Jim Nash, co-founder of the band’s label Wax Trax!, which happened the year before. Not that KMFDM needed help being gloomy and angry. And they’re durable, having released their eighteenth album earlier this year. Okay, as you can undoubtedly tell, I don’t have that much to share about KMFDM. Let’s just move on.