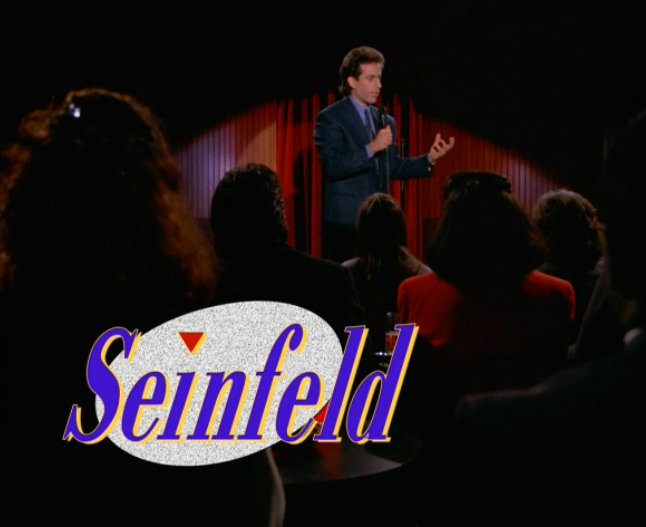 Aside from The Mary Tyler Moore Show and its “Chuckles Bites the Dust,” perhaps no other sitcom has such a clear single-episode high-water mark as Seinfeld. Airing right in the middle of the show’s fourth season, “The Contest” find the four main characters engaged in a wager inspired by one of them, George Costanza (Jason Alexander), recently suffering the humiliation of being caught by his mother while he was masturbating with a copy of Glamour magazine. Each of the quartet puts up a hundred dollars that says they can go the longest without engaging in that particular activity. Actually, Elaine Benes (Julia Louis-Dreyfus) is required to sweeten her bet by another fifty bucks, since everyone else is convinced she’s the favorite. The remainder of the episode is about the little temptations that swarm around them — John F. Kennedy, Jr. bending over in front of Elaine in her exercise class, a naked women with an open blinds policy taking up residence in the building across the street — as their tension and discomfort grows. It’s hilarious, sharp, joyfully dismissive of taboos, and it never once directly names the act of self-pleasure from which everyone is abstaining. Indeed, it barely references it all. Even the euphemisms are soft and elliptical. And yet the topic at hand, so to speak, is always perfectly clear.

Just as “Chuckles Bites the Dust” reveals the underappreciated strengths of The Mary Tyler Moore Show (notably a stealth cynicism that the creative personnel could artfully undercut in a moment), so to does “The Contest” exemplify everything about Seinfeld at its peak, including those elements that the show increasingly lost touch with as it shifted from cult favorite (Seinfeld finished its third season ranked 43rd on the Nielsen ratings, behind fellow NBC shows Blossom and Nurses) to smash hit that the network would pay just about anything to keep running. The plot was defiantly small-scale with the comedy spun directly from the alternately easy and agitated interactions of  exceedingly well-drawn, distinctive characters. Especially in those early years, the series was often described as “a show about nothing,” which largely stems from a misreading of the creators’ deftness with bottle episodes, a convention of the form for at least as long as television characters have had a propensity for locking themselves into walk-in freezers. It was about small things, however, making it a proper extension of the “you ever notice…?” stand-up of the show’s co-creator, star, and namesake, Jerry Seinfeld.

Later in the show’s run, especially when co-creator Larry David’s name started to appear on fewer and fewer scripts, the writers became overly enamored with complicated plots and subplots that often strained to converge in the closing moments of an episode. In season four, the stories still tended to be cleanly conceived and largely relatable. The characters’ troubles could stem from discarding a wallet or double-dipping a chip and the flavor of an episode came not from ludicrous business but from the exasperated reactions of selfish New Yorkers who just don’t want to be bothered. There are a million ways for a relationship to go sour, but sometimes it’s not a cascade of mounting nonsense. It’s just the appearance of an unpleasant hygienic habit at just the wrong moment.

Season four also benefits from a through-line, something of a rarity for Seinfeld. Early in the season, the fictional version of Jerry is approached by NBC executives, suggesting he pitch them a sitcom based on his life. The program keeps circling back to the meta-fictional premise throughout the season, with Jerry and George struggling to write the write the project, George jeopardizing the whole deal by ogling the cleavage of the NBC president’s teenage daughter (Denise Richards), and the same top executive (Bob Balaban, obviously cast due to his passing resemblance to then-NBC head honcho Warren Littlefield) becoming obsessed with Elaine. The season ends with the pilot being cast, filmed, and discarded, providing an alternate history in which The Seinfeld Chronicles never made it past its shaky beginnings. The discipline inherent in always having a bigger picture storyline to return to helps the show avoid the dangerous digressions within digressions it was probe to because of its natural rhythms. Maybe more importantly, sticking to the plan forestalled the later tendency to overuse popular side characters. That’s what eventually allowed Cosmo Kramer (Michael Richards) to shift from genial oddball to full-on cartoon, sometimes literally.

I suspect the relative struggles of the show up to this point also helped keep the comedy directed more at Jerry, George, Elaine, and Cosmo, extracting the laughs from their humiliations rather than their mockery of others. One of the reasons the series finale was so widely disliked is that David, returning to the show after a couple years away, took the opportunity to repeatedly point out that these beloved television characters were not nice people. There would come a time when Elaine would be the victor over the Soup Nazi, but in season four the show was still more interested in delivering comeuppance to the central characters. That made for more satisfying comedy, whether it was Elaine aghast at an accidental indiscretion on her Christmas card or Jerry losing a girlfriend because he’s forgotten her name, remembering only that it rhymes with a female body part. By his own admission, David has predicated most of his comedy on various depictions of asshole behavior. He also knew sometimes the comedy is most satisfying when the asshole doesn’t win. 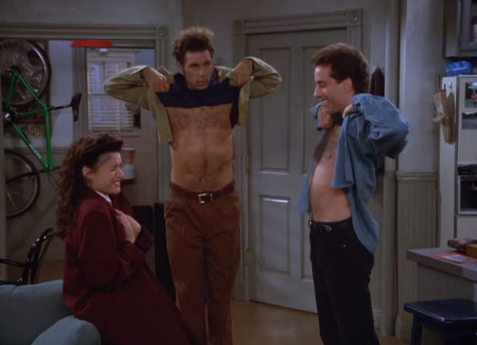 Midway through season four, Seinfeld moved from its Wednesday timeslot to Thursdays, taking up the blessed position of airing after Cheers during the stretch run of its victory lap final season. It’s time as an underdog was over. It was the #3 program of the year the following season, and ranked first or second for the rest of its run (across a whole season, only E.R. bested it). I prefer the bit of scrappiness the series had when its survival was in question, when an episode like “The Contest” was delivered with the impish glee of kids getting away with something because they’re pretty sure the parents aren’t paying attention, and besides there’s really nothing to lose. In season four, Seinfeld wasn’t about overtly feeding its burgeoning dictionary of cultural jargon or pumping up its own myth of historic greatness. The goal often seemed little more than being as funny as possible while staying true to itself. It’s a goal it reached with remarkably consistency.