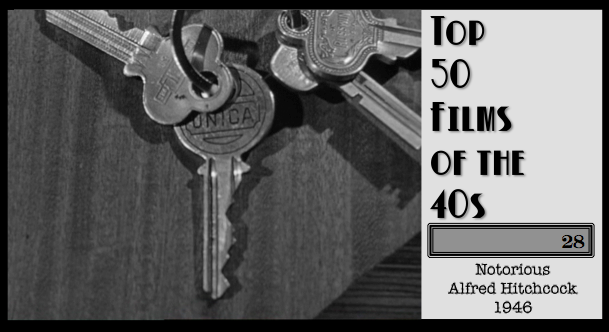 It seems Notorious began with a desire on the part of director Alfred Hitchock to cast Ingrid Bergman as a woman involved in deceits and duplicitous machinations at the highest levels. This inkling would have come to him at right around the time Bergman was collecting accolades and a bright, shiny Academy Award for her work in Gaslight and as he was on the cusp of working with the actress on Spellbound, a film similarly preoccupied with the way madness can infiltrate as person’s psyche, including through the manipulations of others. Whether or not Hitchcock was primed to give Bergman a little bit of relief from those heavy, demanding roles, that’s exactly what happens in Notorious. Yes, the film is awash in suspense and scored with the director’s famed psychosexual fascinations. It also provides Bergman a chance to deliver an atypically loose and liberated performance, taking hearty swings at her character’s glum hedonism as she endures the unwelcome attention that comes with having a father who’s been convicted of spying for the Nazis.

Bergman’s character, Alicia, is drawn into an effort by U.S. government agents to monitor the actions of a group of Nazi spies that have taken up residence in Brazil after the war. Following instructions, Alicia makes romantic overtures towards Alex Sebastian (Claude Rains), despite her attraction to her main U.S. handler, T.R. Devlin (Cary Grant). As opposed to the sort of spy caper that it dependent on ludicrously complex plots, Notorious builds its tension through the smallest of details — a broken bottle, a missing key — relying on the carefully developed dynamics between the characters to stir up anxiety. Hitchcock is often celebrated for his novel staging and sly innovations, the playfulness he brings to the art of shaping narrative, but his greatest skill, the one that truly sets him apart from almost everyone else who sat behind a Hollywood camera, is making the minuscule mighty in any given story. A giant splash has an impact. A well-placed pebble creates ripples that are far more disconcerting on an otherwise placid surface. Hitchcock knew that, and makes it work marvelously in Notorious. For a filmmaker known for the big and bold, he had amazing restraint.

Of course, Hitchcock was also a devilish manipulator of audiences. Notorious was released in early September of 1945, almost exactly one year after World War II officially ended with the Japanese signing surrender papers aboard the USS Missouri. The nation — the world — was still adjusting, considering the potential residual trouble that might arise from all those unaccounted for Nazi scientists strewn across nations. What might now seem like a quaint, handy means of establishing villainy in the film (and Hitchcock was certainly not adverse to short cuts in establishing the good, bad, and dangerous in his films) must have seems raw and fraught with immediate threat when the film arrived. Hitchcock takes full advantage of that, making every overture of the Nazis seem incredibly insidious, a first domino teetering before of a field of black tablets ready to flatten the world. It wasn’t a measured consideration of the geopolitical troubles of the time. It was ever better: an inspired exploitation of those troubles to concoct the highest of drama. Because, let’s face it, more than inform or inspire, that’s truly what movies do best.