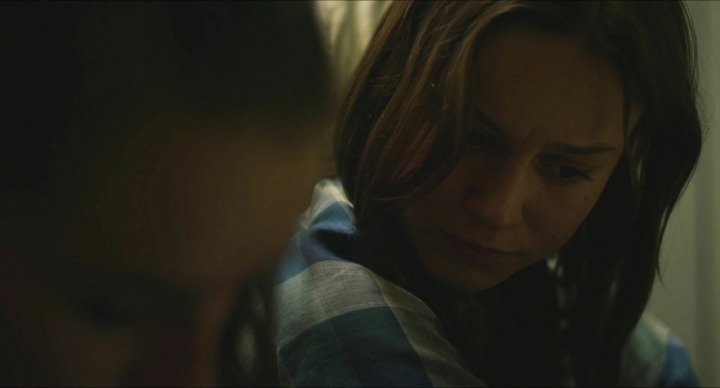 Written and directed by Destin Danile Cretton, Short Term 12 is intensely focused in portraying the tender existences of people connected to a group home for struggling teens. There are big moments in the film — troubling revelations, devastating individual choices, acts of violence — but it’s even more compelling in the attention it gives to the emotional gashes that can last a lifetime, never quite healing over enough to become scars. Some bruises are forever tender.

At the center of the film, encompassing all of its trembling complications, is the performance by Brie Larson as Grace Howard. One of the supervisors in the group home, Grace is fiercely dedicated to her charges and, it seems, has more of knack for reaching troubled young people than some of her colleagues. She’s no noble saint, though It is not a portrayal of beatific delicacy. As acted by Larson, Grace is strikingly human. Even as she approaches the residents of the group home with thoughtful care, she can be impatient, stern, and visibly worn out. There is therapy and compassion at play, but it is also a trying job, and Larson wears the day-by-day of it all like a lead-lined coat.

There’s also a lurking risk in Grace’s involvement with the group home residents. Her ability to sympathize is strong in part because of the dark secrets in her past. She can be rash in her decision-making and a righteous in her certainty of the best course of action, qualities that sometimes derail her. Larson artfully plays the conflicts that keep Grace in a precarious stasis. There are moments that flare, but much of Larson’s performance is notable for its simmering uncertainty, the hesitant reaching for a handle she knows has a high likelihood of scalding her. The people who support her, including a coworker who is also her kind, adoring romantic partner (John Gallagher, Jr.), are eyed by Grace with skepticism, less because of they have demonstrated themselves to be untrustworthy and more out of a grim certainty that the universe twirls on the axis of betrayal. Larson makes this emotional hardship experienced by Grace into an ache so real it’s almost solid.

Larson probes into her character with a commitment beyond developing many layers. Instead, Larson builds those layers and then manages to show them all at once, draped across one another like sheets of vellum that shift subtly as the light changes. At times, the intimacy of the performance is so truthful that it can seem like Grace’s gradual opening up of herself is a real thing, coaxed by Larson rather than acted by her. In committing fully and ferociously to Grace, Larson honors the character. More laudably, Larson honors the many people in the world who are living their own versions of Grace’s quietly heroic endurance.

About Greatish Performances
#1 — Mason Gamble in Rushmore
#2 — Judy Davis in The Ref
#3 — Humphrey Bogart in Casablanca
#4 — Kirsten Dunst in Eternal Sunshine of the Spotless Mind
#5 — Parker Posey in Waiting for Guffman
#6 — Patricia Clarkson in Shutter Island
#7 — Brad Pitt in Thelma & Louise
#8 — Gene Wilder in Willy Wonka & the Chocolate Factory
#9 — Jennifer Jason Leigh in The Hudsucker Proxy
#10 — Marisa Tomei in My Cousin Vinny
#11 — Nick Nolte in the “Life Lessons” segment of New York Stories
#12 — Thandie Newton in The Truth About Charlie
#13 — Danny Glover in Grand Canyon
#14 — Rachel McAdams in Red Eye
#15 — Malcolm McDowell in Time After Time
#16 — John Cameron Mitchell in Hedwig and the Angry Inch
#17 — Michelle Pfeiffer in White Oleander
#18 — Kurt Russell in The Thing
#19 — Eric Bogosian in Talk Radio
#20 — Linda Cardellini in Return
#21 — Jeff Bridges in The Fisher King
#22 — Oliver Platt in Bulworth
#23 — Michael B. Jordan in Creed
#24 — Thora Birch in Ghost World
#25 — Kate Beckinsale in The Last Days of Disco
#26 — Michael Douglas in Wonder Boys
#27 — Wilford Brimley in The Natural
#28 — Kevin Kline in Dave
#29 — Bill Murray in Scrooged
#30 — Bill Paxton in One False Move
#31 — Jennifer Lopez in Out of Sight
#32 — Essie Davis in The Babadook
#33 — Ashley Judd in Heat
#34 — Mira Sorvino in Mimic
#35 — James Gandolfini in The Mexican
#36 — Evangeline Lilly in Ant-Man
#37 — Kelly Marie Tran in Star Wars: The Last Jedi
#38 — Bob Hoskins in Who Framed Roger Rabbit
#39 — Kristin Scott Thomas in The English Patient
#40 — Katie Holmes in Pieces of April